Greenpeace and the Spanish navy have issued conflicting accounts of two collisions between dinghies in the Atlantic Ocean. A Greenpeace activist, protesting Repsol oil exploration there, was hospitalized as a result. 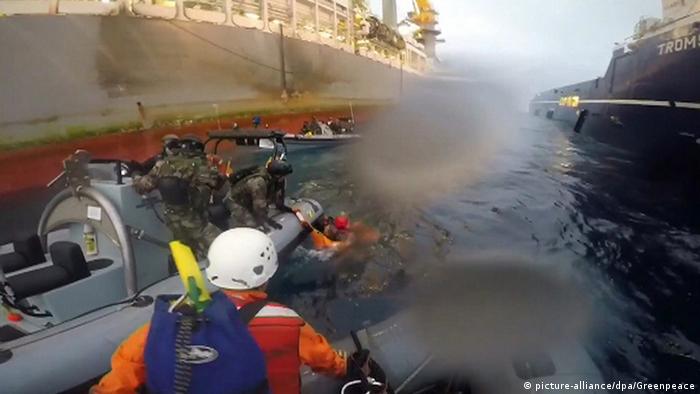 Environmental organization Greenpeace on Saturday said that four of its activists were injured, one of them seriously, when Spain's navy rammed into their dinghy during a protest off the Canary Islands. Greenpeace released video footage of the scenes, showing two collisions between its vessels and ones belonging to the Spanish authorities.

The Greenpeace boats were approaching a large oil drilling ship with a platform, belonging to energy company Repsol.

After the second collision, a woman can be heard crying for help from the water, before a diver on a naval vessel fetches her. Greenpeace identified the woman as a 23-year-old Italian activist, saying she suffered cuts and a broken leg.

Calling the incident "another reminder of the lengths governments will go to protect the oil industry from peaceful protesters," Greenpeace said in its statement on the incident that the navy reacted violently, "deliberately ramming the boats and putting the lives of peaceful activists at risk."

However, the navy instead said that it dispatched two boats from one of its ships to prevent Greenpeace from boarding a large oil drilling ship. The authorities said that the activist fell from her dinghy and suffered her injuries when she was hit by its propellers.

Spanish oil giant Repsol is exploring the Atlantic Ocean off the Canary Islands, notably Fuerteventura and Lanzarote, for new drilling sites. It's not an entirely popular endeavor. Last month, at the government's request, the Constitutional Court blocked a proposal from the Canary Islands regional government calling for a referendum on oil exploration off the popular tourist archipelago. Residents have voiced concern that oil exploration, or possibly spills, could hurt the region's thriving tourism and fishing industries.

Repsol has promised to take steps to protect the environment, saying the project will create jobs on an archipelago with 30 percent unemployment, just over the Spanish national average.

The Greenpeace crew protesting the development is aboard the Arctic Sunrise icebreaker, the same ship that was seized last year and held for months by Russian authorities. It returned to the Netherlands for repairs in August, almost a year after a similar alleged attempt to board a Russian oil rig.