Thousands of people have rallied to the streets of Athens demanding an agreement to keep Greece in the eurozone. EU President Donald Tusk called an emergency summit over the bailout row for Monday, as time runs. 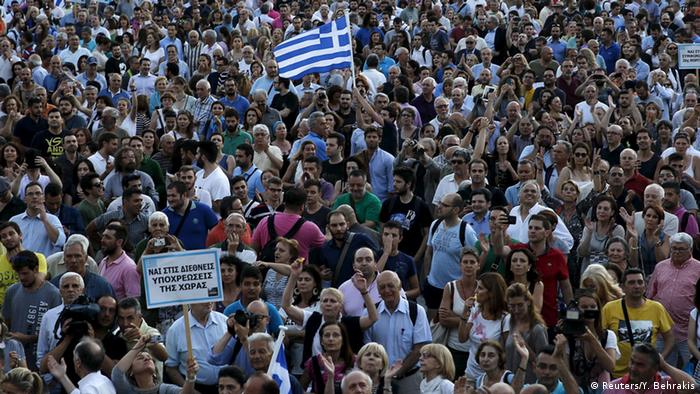 Some 7,000 protesters gathered outside the seat of Greek parliament Thursday evening, calling on the government to end the debt deadlock that could push Greece into bankruptcy. Legislators from opposition parties attended the rally, held under the motto "We're staying in Europe."

The leftist government of Prime Minister Alexis Tsipras needs to a reach a deal with international lenders, in order to pay 1.6 billion euros due to IMF before the end of the month. Otherwise, the impoverished EU member would face default and a painful prospect of leaving the euro.

Despite mounting pressure, the Greek authorities rejects demands from international lenders, which include pension cuts and labor market reforms.

The Thursday protest followed a Luxemburg meeting of eurozone finance ministers, which once again yielded no results on unlocking the bailout money necessary for Athens to pay off its debts. The demonstration, however, was smaller then the rally in support of the government's course a day before.

The eurozone supporters announced they will come out to the streets once again on Monday, in time for the emergency eurozone meeting called by European Council President Donald Tusk.

"It is time to urgently discuss the situation of Greece at the highest political level," EU Tusk said in a statement Thursday evening.

The upcoming meeting in Brussels, where Tsipras is to face his counterparts Angela Merkel and Francois Hollande, could decide the economical future of Greece as well as the joint European currency.

If the talks fail, it could trigger dangerous economic repercussions across the European Union and raise doubts concerning stability of euro and the Union itself.

Faced with the current deadlock, however, European officials have started openly discussing the prospect of Greece leaving the monetary union.

"It is our deepest wish to keep them in the eurozone. Having said that, if that in the end were not possible, we are prepared for all eventualities," Jeroen Dijsselbloem, chairman of the Eurogroup said on Thursday evening.

The majority of Germans are not worried about the impact of "Grexit" on their savings, according to a poll by German state broadcaster ARD.

In another blow to Athens, IMF chief Christine Lagarde rejected the speculation that Greece would be granted leeway on the debt payment, which is due before the end of the month.

"There is no grace period," she said Thursday.

At the same time, Greek Finance Minister Yanis Varoufakis said he warned his Eurogroup colleagues on Thursday that "we are dangerously close to a state of mind that accepts an accident" involving his country.

"I urged my colleagues not to fall prey to this state of mind," he said. "We can forge a good agreement."