Greece will need no further financial bailout agreements from next year, according to its prime minister. The financially troubled country's leader announced it will leave its EU-IMF bailout agreement as planned in 2014. 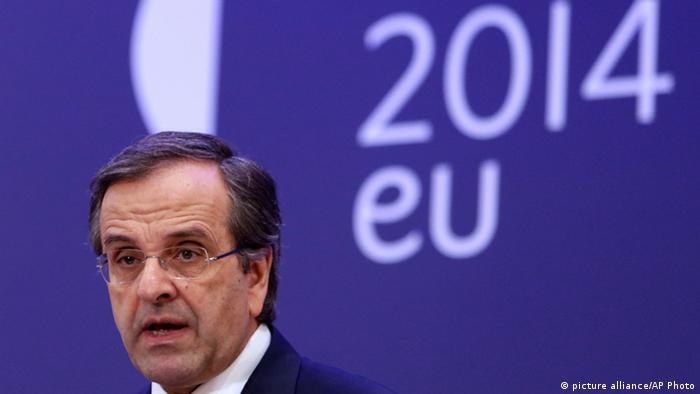 Speaking to Greeks in a nationally-televised address on Monday night, Prime Minister Antonis Samaras (pictured) signalled the country was steadying its financial footing.

"In 2014, Greece will venture out into the markets again [and] start becoming a normal country," he said, adding that there would be no need for new loans and bailout agreements from the European Union (EU) or the International Monetary Fund (IMF). "In the new year, Greek debt will be officially declared viable."

In 2010, Greece was first bailed out 110 billion euros ($151 billion) by the 'troika' of the EU's European Commission, the IMF and the European Central Bank (ECB).

The country became very close to exiting the eurozone when those efforts failed, but instead received a second rescue package in 2012 of 130 billion euros ($179 billion) as well as a debt write-off for the private sector of more than 100 billion euros ($138 billion). This bailout is due to expire in 2014.

Greece is experiencing a sixth year of recession and more than 27 percent unemployment, leading to doubts among creditors that its weakened economy will be able to continue without more lending assistance from the EU and IMF. However the Greek government is expecting slim growth in 2014 and, not counting debt servicing costs, a small budget surplus.

The New Year's address by Samaras on Monday night followed an early-morning attack on the German ambassador's residence in Athens. About 60 shots were fired at the residence from a Kalashnikov assault rifle. No one was injured.

Many Greeks blame Germany for economic hardship caused by the austerity measures the Greek government had to impose as a condition for the international bailouts, but so far no one has claimed responsibility for the attacks.

A statement released by the Greek government said the "cowardly terrorist action" was intended to damage the country's image abroad, as Greece prepared to begin its term as EU president.

German Foreign Minister Frank-Walter Steinmeier also voiced concern about the attack, but said it would not hurt Germany's relationship with Greece.

Earlier this month, Ireland became the first bailed-out eurozone nation to exit the IMF-EU rescue program and have its government return to the markets for its borrowing. Fellow rescued nation Portugal hopes to do the same in May 2014.

Greece is on the right track, said Chancellor Merkel after meeting with Greek Prime Minister Samaras in Berlin. Samaras used the occasion to hold the EU, ECB and IMF Troika to past promises of relief. (23.11.2013)