The vote came after a key minister in the Greek government quit last week over the Macedonia name dispute. Prime Minister Tsipras said he would put the ratification of the Macedonia name-change agreement on the agenda. 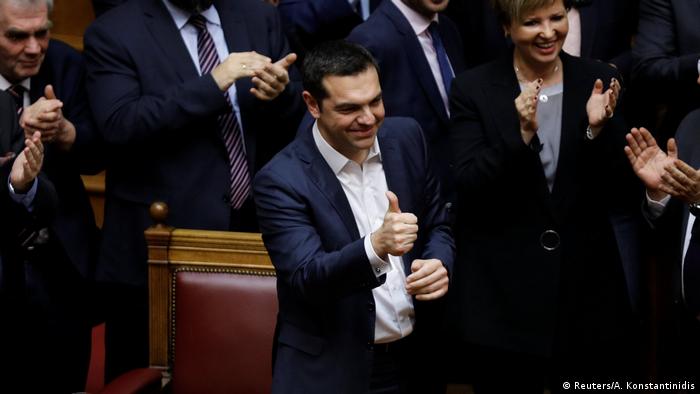 Tsipras received the minimum 151 votes he needed from the parliament for his government to survive.

Speaking after the vote, Tsipras said winning a vote of confidence was a vote for stability in Greece.

Panos Kammenos, the defense minister in Tsipras' government who leads the small nationalist Independent Greeks (ANEL) party, was the latest minister to quit the coalition over a proposed name-change agreement with neighboring Macedonia.

Greece has been blocking Macedonia from joining NATO and the European Union for a decade over the name row.

Under that agreement, the former Yugoslav republic added the geographic qualifier "North" to its name to differentiate itself from the ancient and modern-day Greek province of the same name, in exchange for Greece to no longer block its path to NATO and EU membership.

Kammenos said the deal did not go far enough and argued that no country should be allowed to keep the name "Macedonia" in any form.

Tipras had earlier said that if he won the vote, he would swiftly put the ratification of the agreement with Macedonia on the agenda.

Even if he had lost the vote, he had said he would continue leading a minority government until the regular election set for October.

Speaking following a meeting with Tsipras on Wednesday in Athens, EU Economic and Financial Affairs Commissioner Pierre Moscovici said the name-change agreement is supported by all EU member states and is beneficial to Greece, the Ekathimerini news portal reported.

Greece's coalition government appears to be unravelling after the foreign minister resigned over the name-changing deal with neighboring Macedonia. Tsipras is under pressure from a key coalition ally. (17.10.2018)

US approves more weapons sales to Taiwan 7h ago

US, India to sign defense pact on sharing satellite data 8h ago