A priest who was facing disciplinary measures for drug trafficking has allegedly carried out an attack with a caustic liquid. Several people were injured and are receiving treatment. 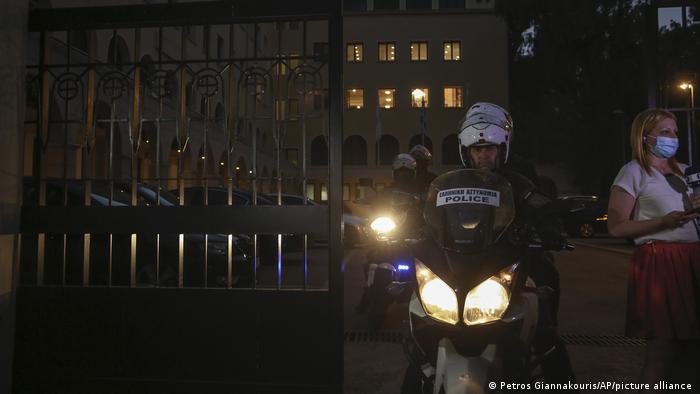 A Greek Orthodox priest threw acid into the faces of seven bishops in Athens, police reported on Wednesday.

The attack took place after the bishops had decided on disciplinary measures against the priest for alleged drug trafficking.

The bishops suffered injuries from a corrosive liquid on their skin and in their eyes, but doctors at the hospital where the bishops were taken said that the injuries were not life-threatening.

What happened in the acid attack on the bishops?

A spokesperson for Greece's Orthodox Church told German news agency dpa that it is believed the perpetrator used sulphuric acid. The attack came after the announcement of the priest's punishment.

A police officer was also injured in the fray. The 37-year-old priest was arrested and will face a judge on Thursday, Greek news channel ERT reported.

Greece's Health Minister Vassilis Kikilias visited the injured in the Athens hospital. He told reporters that four of the bishops had suffered only light injuries while another had been transferred to the plastic surgery unit of another hospital.

ERT reported that the bishops had met to hold a hearing on whether or not to depose the priest from the clergy.

What were the reactions to the attack?

Greek Orthodox Archbishop Ieronymos said he had been "deeply saddened" by the attack.

President Katerina Sakellaropolou also expressed her disgust in a tweet, saying: "I have just spoken with his holiness [Archbishop Ieronymos], who informed me of the attack on members of the Synodal Court of the Petraki Monastery."

"I express my disgust for this unprecedented incident and wish the victims a speedy recovery," she said.