Members of the neo-Nazi group Combat 18 are suspected of attacking migrants and left-wing activists. Police said the ring was planning a major bomb attack. 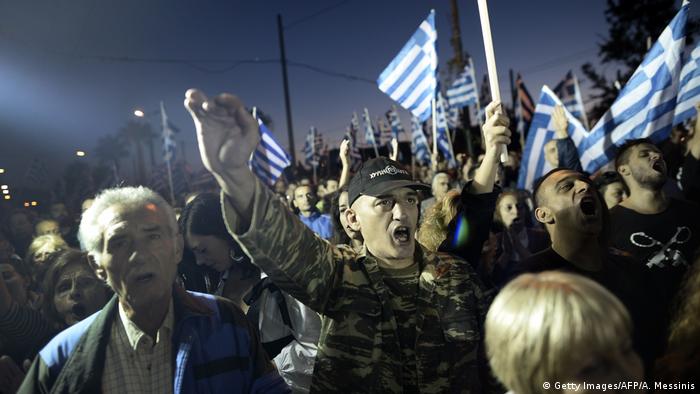 Greek anti-terror units have broken up a neo-Nazi ring believed to be behind attacks on migrants and far-left groups.

A police spokesperson told the news agency dpa that the neo-Nazi members were suspected of planning to carry out a large bomb attack.

Local media reported the suspects are members of the Greek branch of the neo-Nazi network Combat 18 and Autonome Nationalists.

Combat 18 is an armed group that originated in Britain and has spread to other European countries. The number 18 refers to Adolf Hitler's initials – the first and eighth letters of the alphabet.

Far-right attacks on migrants and left wing activists have increased in recent months.

In February, five people were injured in the port city of Piraeus in a right-wing attack on an anti-fascist center.

Some 70 lawmakers and party officials from the neo-Nazi Golden Dawn, the fourth largest party in parliament, are currently on trial on various charges, including attacking migrants and left wing activists.

US neo-Nazi groups on the rise under President Donald Trump: report

The number of hate groups in the US has risen during Trump's first year in office, according to a new report. Neo-Nazi groups in the US witnessed startling growth, increasing by 22 percent. (22.02.2018)

A court in Stuttgart has sentenced the 29-year-old creator of a banned neo-Nazi website to two and a half years in prison. The site published content that denied the Holocaust and targeted Jews, refugees and foreigners. (08.02.2018)