Greek government confronted by internal divisions | Europe | News and current affairs from around the continent | DW | 09.03.2015

The government of Prime Minister Alexis Tsipras would like to extend international aid for another four months - without parliamentary approval. The move has rallied critics from within the ranks. 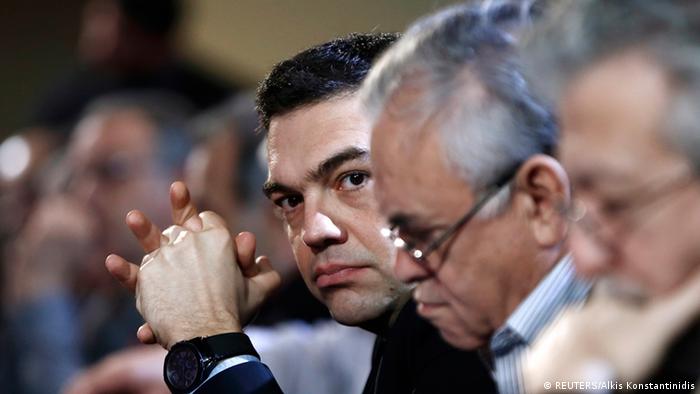 Prime Minister Alexis Tsipras' left-wing Syriza party is beset by domestic infighting. The dispute focuses on Greek EU membership and on who wields authority in the relationship between Athens and its lenders. While the bailout for Greece has been extended to the end of June as far as the EU partners are concerned, the left-wing prime minister continues to insist on the domestic stage that merely the "credit deal" was extended, not the entire austerity program. The wording implies that new austerity measures and budget cuts are no longer an issue.

His line of argumentation, however, is meeting with mistrust and criticism from within his own ranks. At a closed-door session of his party's parliamentary group last month, all deputies opposed this deal with the EU partners. In a straw vote, at least ten lawmakers voted against extending financial aid for Greece, while others abstained from the ballot.

"Should this deal be presented to parliament, we would have to vote against it," warned Nikos Mavraganis, a member of Syriza's junior coalition partner Anel.

As a result, Syriza party leaders decided it wasn't necessary for parliament to give its blessing to this latest agreement with the country's creditors.

"The government hasn't signed a new loan agreement; it's merely extended the existing accord," the Avgi leftist daily wrote in support of the move.

"The contradiction is evident: on the one hand, they are talking about the extension of an existing agreement and on the other hand, they want to make the voters believe that the austerity program hasn't been extended," Greek economist Makis Andronopoulos told DW.

The leftist party was a prisoner of its own rhetoric, he added.

Andronopoulos has a weak spot for the Greek left: unlike his predecessors, Prime Minister Tsipras was a young hopeful who had nothing in common with the country's powerful political dynasties, he said. Tsipras was in a position to fight corruption and dubious networks, the analyst added - at least once he had freed himself of the party's far-left dead weight. What was needed was a "Night of the Long Knives" to get rid of the leftist party wing, Andronopoulos said, explaining that in 1977, Socialist leader Andreas Papandreou had several leading party members ousted all at once, "before his Pasok party came to power in 1981."

It was not as easy for Tsipras, however, because infighting would threaten the stability of the government. "Should Tsipras really dare to break away, there will soon be new elections," Andronopoulos warned. 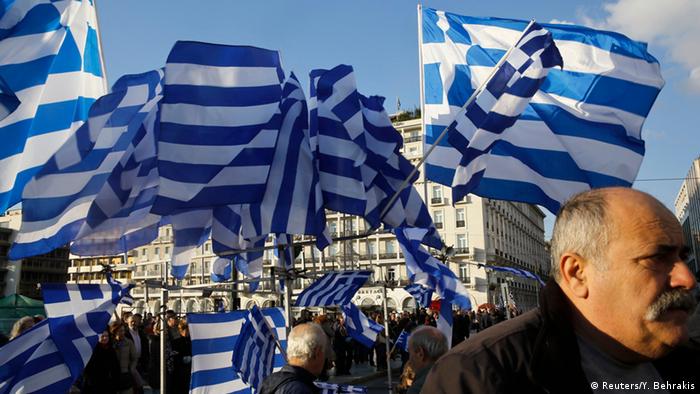 Greeks take to the streets in protest at harsh austerity measures

And Syriza's left wing has been more vocal over the past days. After EU parliamentarian Manolis Glezos publicly accused the party leadership of having "betrayed its election program," left-wing economist Kostas Lapavitsas on Friday demanded a "restructuring" of the Greek debt in June. He urged the ruling party to implement as many of its election pledges as possible until then.

"The four-month extension is aimed at making sure that Syriza starts realizing its own election program," Lapavitsas said in a TV interview.

Unlike Finance Minister Yanis Varoufakis#, who wants to keep Greece in the eurozone, Lapavitsas advocates a return to the drachma currency. The two agree, however, that there will be negotiations with the lenders on reorganizing the debt at the end of the four-month extension period.

Syriza came to power so it could implement its election program, Lapavitsas said. Should Greece have to decide between a new austerity program and membership in the single currency come June, they would "ask the people." Whether he meant new elections or a referendum was not immediately clear.

"Greek voters tend to be conservative," Makis Andronopoulos said, arguing that they favor promised new negotiations, but oppose an open break with the lenders. The leftist government should never forget that it owed its election victory to conservative voters, too, Andronopoulos warned.

At least the government's first draft law didn't split politicians in Athens, quite to the contrary: on Friday in parliament, the left, the conservative opposition and the Socialist Pasok party all voted in favor of an emergency plan to balance social hardships caused by the austerity measures. The plan is to provide food ration cards and housing allowances for the needy, at an estimated cost of about 200 million euros ($216 million.)

Berlin calls for 'clarity' ahead of new talks on Greece

Athens could call for a referendum or early elections if the eurozone rejects its debt plans, Greece's finance minister has said. The present government won elections on promises of renegotiating the EU bailout program. (08.03.2015)

Greece is calling for immediate, technical talks with its lenders on reforms which would help end its current bailout program and allow for fresh loans. Eurozone finance ministers are set to meet next week. (06.03.2015)