Greece is calling for immediate, technical talks with its lenders on reforms which would help end its current bailout program and allow for fresh loans. Eurozone finance ministers are set to meet next week. 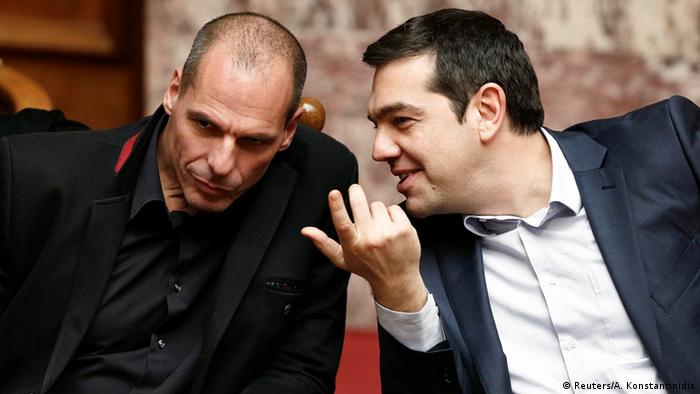 If Greece can conclude its current bailout, it would be able to claim loan funds remaining from the 240 billion-euro package ($260 billion). Concluding the bailout means implementing reforms the previous government agreed to, but that Athens' new leaders have rejected.

Greece has monthly needs of about 4.5 billion euros, including a wage and pension bill of 1.5 billion euros. It is not due to receive any financial aid until it completes a review by lenders of final reforms required under its bailout.

Athens is due to repay a total of 1.5 billion euros to the International Monetary Fund (IMF) over the next two weeks.

Reuters quoted a letter from Greek Finance Minister Yanis Varoufakis (photo, with Prime Minister Alexis Tsipras, right) to the chairman of euro zone finance ministers, Jeroen Dijsselbloem on Friday: "I am now writing to you ... to convey the Greek government's view that it is necessary to commence immediately the discussions between our technical team and that of the institutions."

In the letter, seen by Reuters, Varoufakis said Greece did not want to wait until April to start talks, which it said should be held in Brussels rather than Athens. He wrote that Greece wanted the new financing deal to be called a "Contract for Recovery and Growth of the Greek Economy."

The AFP news agency said it had obtained a copy of the letter. It included proposals for seven reforms to act as the basis for the technical talks with Greece's lenders - the European Central Bank, European Commission and the IMF.

They included creation of a Fiscal Council to act as independent watchdog monitoring government fiscal policy; spending ceilings for various levels of government with corrective mechanisms and hiring large numbers of non-professionals to act as tax inspectors for two months:

"The very news that thousands of casual onlookers are everywhere, bearing audio and video recording equipment on behalf of the tax authorities, has the capacity to shift attitudes very quickly," Varoufakis wrote.

The letter contains the assessment that only 8.9 billion of 76 billion euros in outstanding tax arrears could actually be collected. It therefore includes a proposal involving the offer of reductions and instalment plans to improve chances of recovering the tax revenue.

But he added: "If the Greek program is in a position to work out its list of reforms in detail earlier than the end of April, and the troika agrees to it, and if this program is, accordingly, implemented earlier, it would of course be possible to make a payment earlier."

Greece's prime minister wants to meet with the head of the European Commission in an attempt to break the deadlock over debt repayment. But both the EU and the ECB are taking a hard line, saying Greece must do more. (06.03.2015)