The Greek government says it will bring legislation before parliament next week designed to help deal with the crippling effects of years of austerity. These include widespread poverty and unemployment. 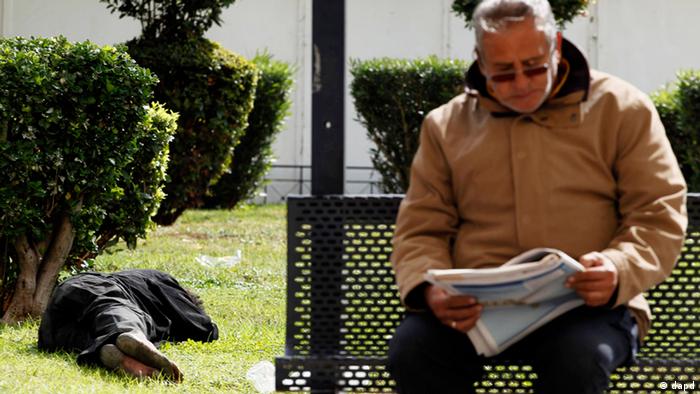 Prime Minister Alexis Tsipras made the announcement in a cabinet meeting broadcast live on television. "The first bill that we will introduce in parliament at the start of next week will cover measures to combat the humanitarian crisis," he said.

Tsipras' Syriza party was voted into government in January on a platform of ending tough austerity measures imposed by the country's international creditors.

Last week the 19 members of the eurozone approved a four-month extension on its current 240-billion-euro ($270 billion) bailout program, which had been due to expire on Saturday.

In exchange, the Mediterranean nation has had to agree to implement reforms that will work towards boosting government funds, while promising not to get rid of previous measures without first consulting creditors.

On Tuesday it presented a six-page list outlining their plans.

Finance Minister Yanis Varoufakis has assured Greeks that value added tax will not be increased on medication or food. Greece's creditors have pushed for it to be raised to increase government tax revenue.

"I will search to find a tax rate on an insignificant item so we can show goodwill," he said. Athens must also shore up its commitment to reforms in order to receive its final bailout payment, as well as find billions of euros to repay its debts.

These new laws, as set out by Tsipras in his election program, encompass free electricity for 300,000 poor families, housing for 30,000 families, and debt relief for citizens and businesses who owe the state money.

Other legislation will also protect many at risk of forfeiting their homes. A goldmine planned in northern Greece in conjunction with a Canadian company has also been scrapped.

"This constitutes our first task for a society that has been suffering these past five years," Tsipras said.

The extension must be given final approval by several European parliaments. Earlier on Friday the German Bundestag voted in favor of the plan, despite polls showing most Germans did not agree with it.

Tsipras also promised that there would be no "third memorandum" once the current bailout expires. "The bailout agreements are over, both in form and in essence," he told the cabinet.

"Some people are betting on a third bailout in June (…) but we will disappoint them."

As Tsipras was speaking, thousands of communist party members gathered outside on Syntagma Square.

It was the first sizeable demonstration, and the second anti-government protest in as many says.

Despite this, polls are showing the new left-wing government has actually grown in popularity, with support climbing from 36 during January's election to 47 percent.