The presence of Turkish troops on a potentially reunited Cyprus has split leaders taking part in UN-sponsored talks. Ankara has said a Greek Cypriot call for Turkish troops to leave the island was "out of the question." 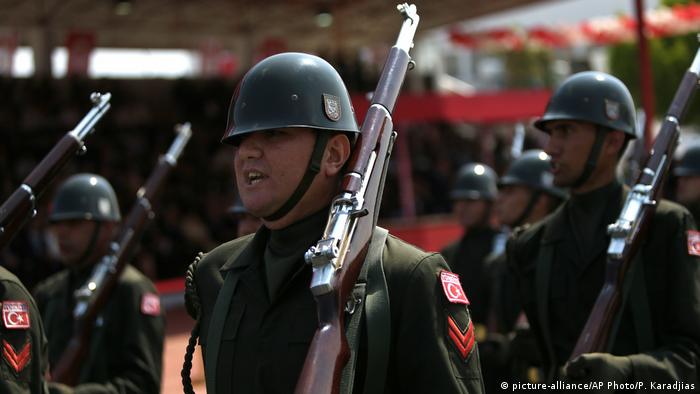 Top international diplomats have arrived in Geneva as talks seeking to reunify the divided island of Cyprus enter a crucial stage. UN chief Antonio Guterres said the talks would go on as long as necessary. (12.01.2017)

UN-sponsored talks between Greek and Turkish leaders in Switzerland have achieved significant progress. They will resume later this month with the aim of reaching a reunification deal before the end of the year. (12.11.2016)

Peace talks over the division of Cyprus are "on track," the UN envoy has said. European Commission President Juncker said the talks represent the "very last chance" after two earlier inconclusive sessions in November. (11.01.2017)

Secretary-General Antonio Guterres said he believes there is "a historic opportunity" for a breakthrough in talks aimed at reuniting Cyprus. The two sides have been trying to strike an accord for decades. (07.01.2017)

After a week-long conference in Geneva on the possible reconciliation of Cyprus' Greek and Turkish halves, statements from Greek Cypriot President Nicos Anastasiades and Turkish President Recep Tayyip Erdogan have left a possible reunification in serious doubt. At the center of the disagreement are the approximately 30,000 Turkish troops stationed on the island.

"Our position remains... that we must agree on the withdrawal of the Turkish army," Anastasiades told reporters in Geneva on Friday.

The Greek Cypriot foreign minister, Nikos Kotzias, also said there was no way to reunify the island while "occupation" troops are still stationed on it.

"A just solution [to division] means, first of all, eliminating what caused it, namely the occupation and presence of occupation forces," Kotzias said.

At the same time, Erdogan said the removal of all Turkish troops from northern Cyprus was "out of the question."

The Turkish president's strong words came after Turkish Foreign Minister Mevlut Cavusoglu gave reporters a more muted statement Thursday night, telling them that "the reality is that Turkey's guarantorship is vital to Turkish Cypriot people" and that troops are "a force of stability" that must remain on the island.

The 1960 Treaty of Guarantee gave both Greece and Turkey along with Great Britain the right to intervene in the Republic of Cyprus in order to defend the new nation's sovereignty. Ankara justified its 1974 invasion of the island on these grounds. Since then, Cyprus has remained divided between an internationally recognized Greek south and the north, which is recognized only by Turkey.

Though Greece and Greek Cypriots would like to see the guarantor system abolished, Erdogan also pushed that possibility aside.

"We have told Cyprus and Greece clearly that they should not expect a solution without Turkey as guarantor," the Turkish leader told reporters Friday in Istanbul. "We are going to be there forever." The island of Cyprus has been divided for decades

Nevertheless, the Greek Cypriot president and other international leaders remain cautiously hopeful that the Geneva conference will provide clear steps to end to the island's division.

"We are on a path that creates hope," Anastasiades told reporters in Geneva after talking with his Turkish Cypriot counterpart Mustafa Akinci.

British Foreign Minister Boris Johnson, who also attended the conference, said real progress has been made."

"With continued commitment and political will, I believe a historical agreement is within reach," he said in a statement. Britain would agree to abolish the guarantor system and remove its military from the island if requested by Cyprus to do so. Cyprus was a British protectorate and Crown Colony from 1878 through 1960. 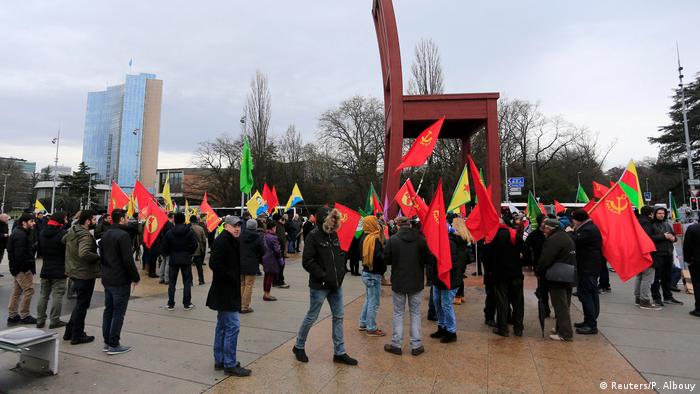 Protests demonstrated against Erdogan outside the Geneva conference

The Geneva Conference also marked the first foreign trip of Antonio Guterres in his new position as Secretary-General of the United Nations. He said a final peace agreement was "close" but that there would not be a "quick fix," noting that implementing and securing an enduring peace deal would take significant work.

"You cannot expect miracles or immediate solutions," Guterres said. "We are looking for a solid sustainable solution."

Officials from involved parties will come together again on January 18 to work on technical security issues while simultaneous negotiations over still-contested issues such as land swaps and the composition of a unified government take place.