Greece to deny support to Iranian oil tanker under US pressure

Greece has told Tehran it will not aid the Iranian flagged vessel by allowing it to dock. The US had suggested anyone cooperating with the tanker's requests was also assisting Iranian and Syrian campaigns of terror. 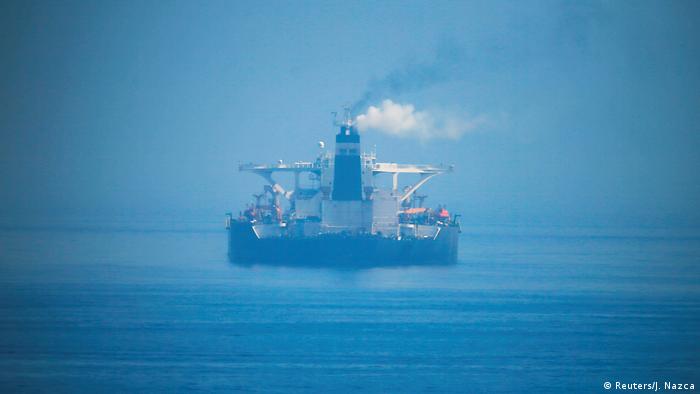 Greece sent a clear message to the US government on Wednesday that it was not prepared to help Iran by facilitating the course of the Iranian flagged oil tanker, supposedly headed for the Mediterranean country.

The supertanker, known as Adrian Darya 1, had spent more than six weeks detained in Gibraltar but set sail on Sunday. The Greek port of Kalamata was suggested as its destination. But this notion received a firm response from Athens.

Varvitsiotis admitted Athens had "faced pressure" from Washington over Adrian Darya 1 but Greece "did not wish to facilitate the transport of this oil to Syria under any circumstances."

US demands turned down

Gibraltar authorities last week rejected a US warrant to seize the tanker that was previously detained by UK troops. The ship set sail and left the British territory, despite Washington's objection of possible terrorism links.

The US Department of State said the vessel is "transporting illicit oil to fuel the Iranian and Syrian campaigns of terror and oppression," and companies and mariners who assist it could be considered as providing support.

The Department of State said Monday it "conveyed [Washington's] strong position to the Greek government on the matter."

Meanwhile, Greece's Varvitsiotis said there had been no communication with Tehran on the issue.

The website Marine Traffic gave Adrian Darya's reported destination as Kalamata and had placed it northwest of the Algerian port of Oran.

However, the vessel, which is carrying 2.1 million barrels (around 284,000 metric tons) of Iranian crude oil, may be too substantial to dock in any Greek dock, never mind Kalamata.

"This is a very large crude carrier, it is over 130,000 tonnes... It cannot access any Greek dock," Varvitsiotis said.

Nevertheless, the Deputy Foreign Minister suggested it may not dock in Greek waters at all.

"It has named Kalamata as its port of destination but this doesn't mean anything."

President Donald Trump has said the US Navy shot down an Iranian drone after a ship took "defensive action." Earlier, Iran said it had seized a foreign oil tanker, accusing it of smuggling oil in the Persian Gulf. (18.07.2019)

Iranian speedboats recently went after a British oil tanker in the Strait of Hormuz. Despite this provocation, the Iranian regime is not out for war, says Rainer Hermann of German daily Frankfurter Allgemeine Zeitung. (14.07.2019)