It used to be that there was a bar on every corner in Berlin, where workers would order a beer to wind down from the day. But these institutions of yore are close to extinction, as more modern watering holes take over. 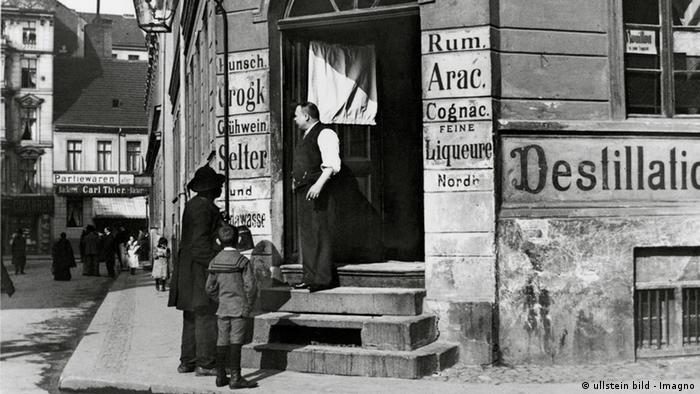 Every second shop on my street sells delicious kebabs, falafels or baklava. There are also a few cafes where elderly Middle Eastern men smoke shisha pipes and play backgammon while sipping tea or coffee. And on a few odd corners - I live on a long road - there is an Eckkneipe, a throwback to the days when the Neukölln district was populated by beer-drinking factory workers and tradesmen. 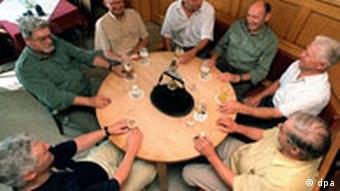 Most punters at a typical Eckkneipe tend to be men

The Eckkneipe - literally, the corner bar - was a place for people to go after work (or sometimes before), to meet up with their friends and neighbors, chat about politics, indulge in a round of cards, or simply drown their sorrows in their beer, or Molle, to use a Berlin term. If they were feeling particularly down they would order their Molle mit Strippe, i.e. with schnapps to chase it down.

There have been plenty of good reasons for Berliners to drown their sorrows over the past century and a half. When the Kneipen started proliferating in the city during Germany's industrialization era, those with jobs would commiserate with their fellow drinkers about the difficult working conditions and poor pay; others who were seeking work would share tips.

The pubs also had a very practical function - they were places to keep warm or get a bite to eat when one wasn't at the factory or at home. Home in this urban jungle was often not the sweet concept so cherished by the English, but rather a room in a cramped boarding house or sometimes only a lice-ridden bed rented by the night.

With the rise of socialism, Eckkneipen also became a place for different parties to hold political gatherings and were often the scene of drunken brawls.

"Who is that standing at the milling-bar, the swilling-bar, the rilling-bar, who is that smiling into the smoky stink-hole?" writes Alfred Döblin in his inter-war masterpiece, "Berlin Alexanderplatz," whose protagonist Franz Biberkopf spends his days roaming the local bars, frequenting the city's underworld and planning his next misdeed. 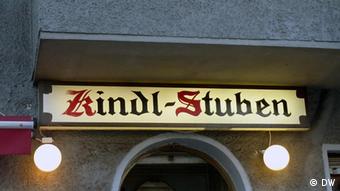 Berlin's pubs are often named after the brewery or the street

These words spring to mind as I, with some foreboding, push open the door of Bierbaum 2, the nearest pub and one I had never dared to enter. The stench of cigarettes knocks me into another world. It takes more than a minute to decipher the silhouettes of people standing at the bar through the fog of smoke, as well as the branches of the fake tree that has invaded the space.

The punters are all staring at this newcomer with bemused expressions. I order a beer. Berlin is not that renowned for its beer and not as proud as other German cities of its breweries but, if you must know, I go for a local Kindl pilsner and sit down. My fellow drinkers quickly welcome me into their fold - by the end of the night and several beers later I've chosen favorite tunes at the jukebox with a plumber neighbor, played darts with the barman and even tried my luck (unsuccessfully) at the slot machines. 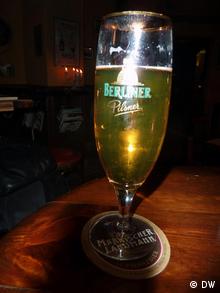 It doesn't take long to down a Berliner Pils

Although the Bierbaum is a corner pub and I've certainly made a few new acquaintances, it's not exactly what I was looking for, not a representative sample of the almost extinct Eckkneipe. Ever since the breweries made it cheaper to drink bottled beer than draft and people have taken to drinking at home, pubs have had to find other means of attracting customers (with billiards, fruit machines, or soccer nights, for example), thus radically changing the whole concept of the local pub.

Bürckner Eck, just a block away, should be right on target, I hope. But no, overnight it seems it's been transformed into a hip bar with jazz in the background and a wine list that runs over three pages.

I have to go a few more yards down the road to Sander Stübl to find a bog standard Eckkneipe. This is more like it. The interior design has not changed in decades: The dark wooden furniture, linoleum floor, neon lights are hideous. The beer is Schultheiss - cold, bitter, cheap and made in Berlin. The drinkers look as if they haven't gotten up from their seats in years; this is their living room. Some of them are playing Skat, others shout across the small room to each other and to the middle-aged barmaid, completely ignoring me and my comrade-in-drinking.

We are outsiders, representatives of a new world that has encroached on Berlin's old traditions, and the fact that we are speaking English doesn't help. 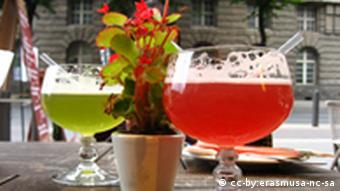 In summer, some might go for a Berliner Weisse, a light wheat beer with syrup but it's an aberration for real drinkers

The punters are more welcoming at Zur Traube near the former Anhalter Bahnhof. Once again, the place is so foggy with smoke that it takes me a moment to adjust. It seems as if time has stopped still (the clock on the wall runs reverse-clockwise from 12 to one as if in tribute to the pub's capacity to transport drinkers to another era). To say that the green leather benches are well-worn would be an understatement. There are pictures of the area in the pre-war days.

I count several pairs of eyes directed at me, all curious as to how I managed to stumble on their sanctuary. I order a beer (what else?), take a seat, introduce myself and am soon involved in the general conversation. German President Christian Wulff (has he resigned yet?) is the topic of the day and we're soon all fighting (politely) about domestic politics.

Meanwhile, the barmaid - the only woman besides me - tops up glasses, welcoming each new customer with a smile and personal greeting. Hours later, I leave the warmth of the Traube with some regret, though my lungs breathe in the icy air with relief!

Herring or pickled eggs, anyone? 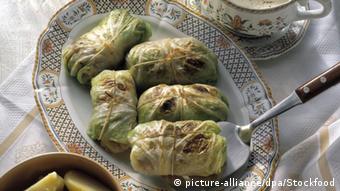 If there's food in a Berlin bar, it will be heavy - cabbage rolls for instance...

The beer has made me peckish so I make my haphazard way to the Dicke Wirtin in Charlottenburg, which has been serving beer, homemade schnapps and hearty fare to locals, artists, actors and students for decades.

You can get a plate of Bouletten (meatballs), a Stulle mit Schmalz (lard on bread), a portion of potato salad or herring rollmops for just a few euros at this Berlin institution. If you're very brave, or particularly drunk, you might order pickled eggs.

Personally I prefer falafels I tell myself as I stumble back to Sonnenallee, and I also love wine bars, but still it would be a shame if all of Berlin's Eckkneipen were to disappear forever.

Rising production costs and logistical issues could lead to a beer bottle shortage, breweries say. Small and mid-sized breweries are likely to be most affected.