Gold mining stirs up controversy in Greece | Europe| News and current affairs from around the continent | DW | 16.01.2014

A Canadian mining company's plans to extract gold from lush forests in Greece have angered locals who say they haven't been properly consulted. They fear short-term economic benefits will destroy their livelihoods. 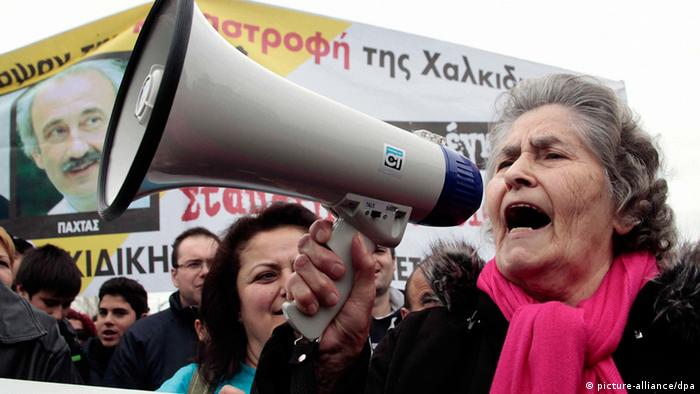 Some 5,000 new jobs in a region with high unemployment rate sound like a dream come true for crisis-stricken Greece, where about 27 percent of the country's population is currently without a job. According to Canadian mining company Eldorado Gold, that is the number of direct and indirect mining jobs that will be created in the Halkidiki region in northeastern Greece.

However, these 5,000 jobs only look good on paper, said Jannis Verginis of the Coordinating Committee of Associations of Stageira-Akanthos Against Gold Mining, a citizen movement that is determined to prevent the start of gold mining in the region.

"It's a question of sustainability. I might be able to employ 1,300 people for 10, 12 years or so, but I also cause huge environmental damage in the process," Verginis said. "I also hurt jobs in other sectors, for instance tourism. If tourism numbers drop by 25 percent, 12,000 people will lose their jobs."

According to Eldorado Gold's vice president and general manager for Greece, Eduardo Moura, the company and its contractors currently employ about 1,600 people in the region. Its subsidiary Hellas Gold, of which Eldorado Gold owns 95 percent, is preparing the region for mining operations.

According to documents on Eldorado Gold's website, the Skouries mine is expected to be open by 2016 and have a mining life of 27 years. 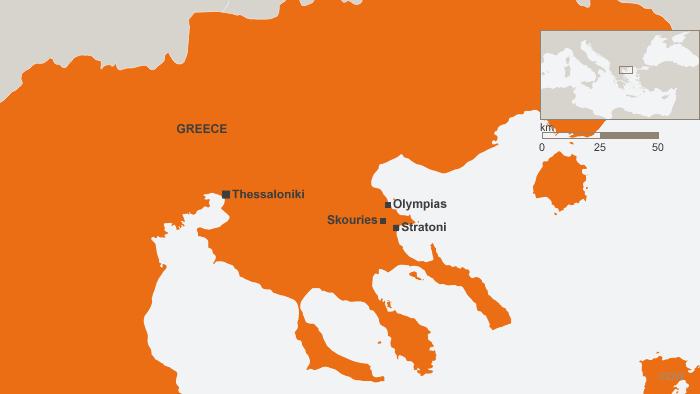 The region largely depends on income from tourism, fishing, farming and beekeeping. At the moment, only the nearby Stratoni silver-lead-zinc producing mine is active. Minerals have been mined there for years.

Now though, Eldorado Gold plans to open Skouries as well as another mine, called Olympias, where it wants to take gold from the earth. Activists say those mines are the beginning of the region's exploitation with more mines set to follow. The company's website advertises the exploration of three other areas as within Hellas Gold's mineral license area in Halkidiki. Exploratory drilling was conducted there in 2013.

Activists said they are concerned for residents' livelihoods. "A total of 300 hectares of forest has to be cleared for the Skouries mine," Verginis told DW. "It's pristine forest - and most of it has already been cut."

The company, however, said only 180 hectares have to be removed and has promised to replant the Skouries site.

"Hellas Gold will replant areas no longer needed for mining use. The open pit will be re-filled and the landscape rehabilitated at the end of operations at Skouries," Eldorado's Moura told DW in a statement.

According to Maria Kadoglou from the citizens' group Hellenic Mining Watch, a greater area of forest land will be affected since Eldorado didn't factor in the space needed for roads and access facilities on top of the mine and tailings facilities.

"The local people fear - and they have good reason to fear - that their livelihoods will be affected by this huge mining complex," she added. 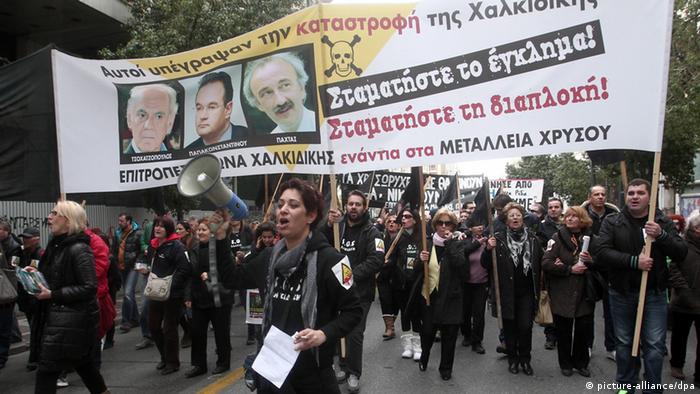 Protesters want to ban gold mining in the Halkidiki region

And it's not just tree the locals are concerned about. They also worry about cyanide used to extract gold from ore. They fear the toxic chemical will destroy their soil and the region's aquifers.

"Our drinking water supplies will be contaminated," Verginis said, adding that the region's river system and its sources in Skouries would "be converted as a toxic waste tank for the most part."

A mineralogist, Verginis, said miners would have to use cyanide in order to extract gold and puts the estimate at 100 tons of cyanide per year.

"It might be right that they won't use that [cyanide] in Skouries, but will do so in the neighboring mine Olympias," he said. "But they keep quiet about that and rather advertise they won't use cyanide in Skouries."

According to Reuters, company officials have said that cyanide would be used in a nearby mining plant but not in the quantities villagers fear.

Eldorado told DW in writing that the Skouries and Olympias projects were not permitted for cyanide use. "Using cyanide for gold processing is planned at the Perama Hill project," Moura wrote, referring to another mining project in eastern Greece.

Locals have also said Eldorado will use a technique that hasn't been properly tested in conditions like those found at the Greek sites.

"They will make use of a process called flash smelting that hasn't been used anywhere else in the world on that mineral concentrate with about 12 percent arsenic and on an industrial scale," Verginis said.

"All international literature shows that flash smelting cannot be used for the Olympias' type of ore," Kadoglou added.

There have been attempts in the past to mine gold in the region. In 2002, the Council of State, Greece's highest administrative court, annulled a mining permit provided to the Canadian company TVX Gold, which owned TVX Hellas, for environmental reasons and because the Greek state had improperly issued the permit. 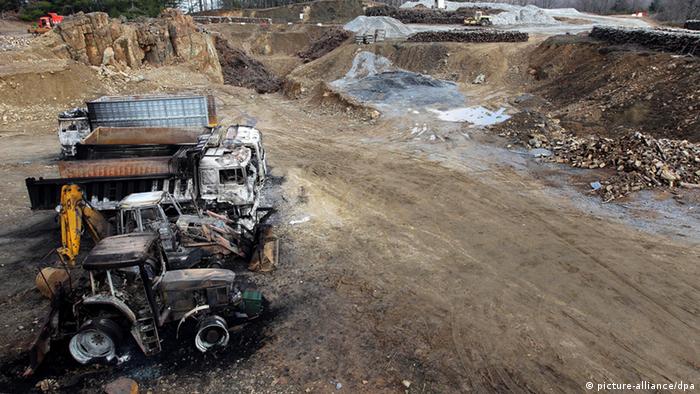 "In 2002, when TVX Gold owned the mines, the Council of State decided mining would be a catastrophe for the region," Verginis said.

Greece will not receive any royalties from mining. However, Eldorado's Moura said Hellas Gold provides approximately 3 million euros annually to the municipality of Aristotelis.

Most of the 20,000 people in the region are not against mining per se. But many locals started to take to the streets in 2012 when mining projects were expanded and should also include open-pit mining, Kadoglou said.

Some of the demonstrations turned violent with police firing tear gas and some protesters burning down company equipment. 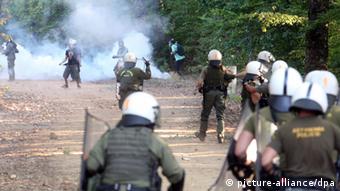 Protesters have clashed with riot police in 2012

At the end of January, Verginis and others plan to take visitors up to the mines to show them the destruction of the forest. He added that huge roads lead up to the mine now.

"We wouldn't be against mining in Stratoni, where people have been mining for lead, zinc and silver for hundreds of years, if stricter environmental demands were passed," Verginis said. "However, we don't want to expand this gold mining project here. Gold mining should be banned from the region."

The municipality will hold local elections in May 2014, and many hope a new mayor, one not in favor of mining, would put pressure on the national government to halt mining in the region. But in the meantime, residents have vowed to continue protesting gold mining.

A number of politicians in northwestern Greece have grown weary of the pollution and health risks resulting from local coal mining. They are looking into an energy overhaul based on renewables. (22.07.2012)

Thousands of people have turned out in Romania to protest plans by a Canadian company to develop Europe's biggest gold mine. The open-cast mine would involve the use of cyanide and the razing of four mountains. (14.10.2013)