Thousands of people have turned out in Romania to protest plans by a Canadian company to develop Europe's biggest gold mine. The open-cast mine would involve the use of cyanide and the razing of four mountains. 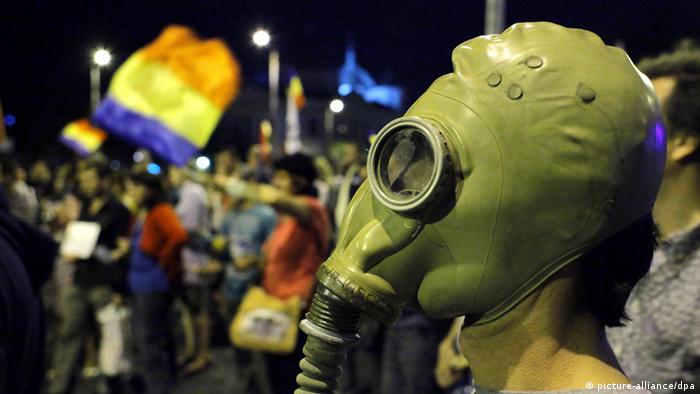 An estimated 4,000 people demonstrated in the capital Bucharest, 3,500 people took to the streets of the northwestern city of Cluj and another 600 demonstrated in Timisoara to demand the mine project in Rosia Montana be dropped. They also called for the government to resign. Protesters marched past government headquarters on Sunday shouting "Your treason is measured in gold!"

The mine is believed to contain 314 tons of gold and 1,500 tons of silver which would be extricated in a couple of decades, according to the project plans.

Prime Minister Victor Ponta had opposed the project when he was a member of the opposition but is now backing it. The bill clearing the way for the mine to be developed has yet to be approved by parliament.

Opponents have criticized plans to create the mine by razing four mountains to make way for an open pit face. They have also warned of the environmental effects of usíng cyanide in the extraction process. Moreover there are concerns that Romania would earn too little from the project.

Academics and environmentalists have said it would be an ecological time bomb and damage the area's Roman mining galleries.

The site has been mined for precious metals since at least Roman times, although work there stopped several years ago.

Supporters of the plan claim it would create jobs for unemployed miners and provide foreign investment to a deprived area. The Canadian company, Gabriel Resources owns 80 percent of the Rosia Montana Gold Corporation. It has pledged to protect the environment and historical monuments in Rosia Montana.

Gabriel Resources acquired a mining license in 1999 but it has been waiting ever since for a permit to begin operations from the environment ministry.

Protests against the mine began after the government sent a bill to parliament in August calling on lawmakers to give their support to the project. A vote is expected in the coming weeks.