The Goethe-Institut is "a chameleon." That's how the German cultural institution is described by President Carola Lentz and ethnologist Marie-Christin Gabriel in their new book marking the 70th anniversary of the non-profit association.

The Goethe-Institut's history is one of "permanent reinvention," Lentz told DW. 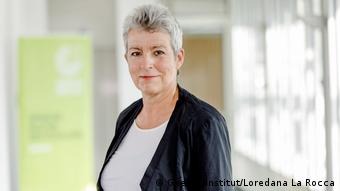 It all started in postwar Germany, when a new association was created in 1951 in Munich to replace its predecessor, the Deutsche Akademie, which had been forced to close six years earlier.

The Deutsche Akademie, founded in 1925, had become a tool of the Nazi state, and at the end of the war the US occupiers dissolved what they perceived as a "Nazis' propaganda and espionage center operating throughout Europe."

The creation of the Goethe-Institut therefore marked a new political beginning.

A new start with German lessons

The Goethe-Institut initially worked with German teachers from all over the world, who were invited to come to Germany for training. 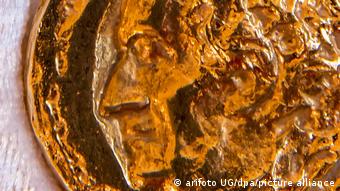 For this purpose, different institutes were founded; the first one was opened in 1952 in Athens. By 1961, 53 more institutes were set up. Today, there are 158 Goethe-Instituts in 98 countries.

Between 1958 and 1963, the Goethe-Institut moved its focus to Africa, and new branches soon opened across the continent.

Yet German cultural ambassadors were sent on tour to Goethe-Instituts all over the world.

For example, jazz musician Albert Mangelsdorff made various well-received stops in Asia with his quartet, and electronic psychedelic music from Germany could be heard in Kabul.

The Cold War led to one of the most gripping chapters in the history of the institute. While the Eastern and Western blocs were engaged in their arms race, the struggle for power and influence also had an impact on foreign cultural policy.

The former East German state, which had also founded in Leipzig in 1951 its own cultural institution, the Herder Institute, started setting up cultural and information centers abroad, and also offered lessons in German as a foreign language. Some of the institutions were in direct competition with the Goethe-Institut.

The competition between the East and the West continued until the fall of the Berlin Wall in 1989.

In the 1970s, a London exhibition financed by the Goethe-Institut sparked controversy in Germany. Poster artist Klaus Staeck had satirized German politicians in his work, and they were outraged that this type of art was created with taxpayers' money.

In 1977, left-wing terrorists attacked the Goethe-Institut in Paris and Madrid.

Other notable personalities' lives have been marked by the institute. In the mid-1980s, the man who would later become Pope Francis learned German at the Goethe-Institute in Boppard, a city in the West German state of Rhineland-Palatinate. The Pope has remained in touch with the family who hosted him at the time.

Comedian Rudi Carell caused a diplomatic uproar in 1987 when he depicted in a short satirical TV sketch Iran's revolutionary leader Ayatollah Khomeini being showered with female undergarments — gifts for the eighth anniversary of the Iranian revolution. The following day, Iran deported two German diplomats and canceled all flights to West Germany. The Goethe-Institut Tehran had to close temporarily.

Expanding to the East

When the Iron Curtain fell in 1989, the Goethe-Institut started setting up its first institutes in countries of the former Eastern Bloc.

In 1992, the then Federal Foreign Minister Klaus Kinkel opened a Goethe-Institut in Moscow — something that had previously been inconceivable.

The terrorist attacks of September 11, 2001 also affected the work of the Goethe-Institut, leading to a stronger emphasis on intercultural dialogue and understanding. 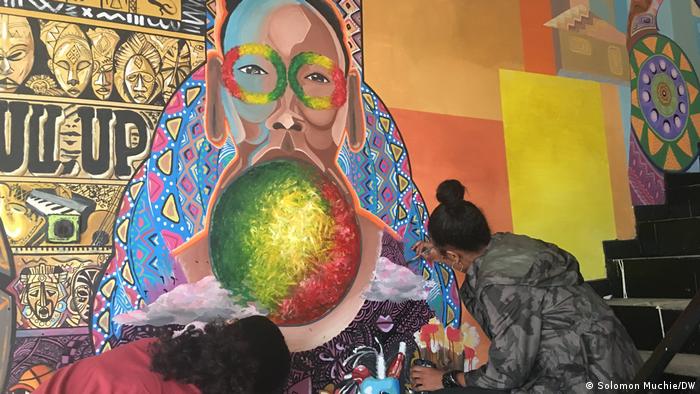 Street art in Ethiopia, a project supported by the Goethe-Institut

The Goethe-Institut still focuses on strengthening civil societies and on conflict prevention. "Our greatest challenge currently is the 'shrinking spaces' phenomenon, that is, the fact that illiberal tendencies, authoritarian regimes are increasingly trying to restrict spaces for artistic and intellectual activities," says Goethe-Institut President Carola Lentz.

For the Goethe-Institut, this means determining where work can still be done and where it temporarily can't ⁠— as is currently the case in Belarus.

According to Lentz, it remains important to keep developing formats that will nevertheless facilitate exchange and encounters.

Lentz, who was born in 1954 and lives in Mainz, is an ethnologist and African Studies expert. She has been at the helm of the Goethe-Institut for one year.

The institution "carries a very diverse, differentiated, multifaceted image of Germany" into the world, she says. Goethe-Institut's approach aims to be considerate, and not arrogant, she adds. It is about developing joint answers to global questions, together with international partners.

"Through the diverse and extremely exciting literary, musical and artistic projects that we are happy to showcase, we hope to launch conversations with people in other societies."

The Goethe-Institut president sees her institute as "well equipped" for its role as a global networker. She hopes to see the new coalition government in Germany "recognize that culture has to be an essential part of foreign policy."

For Lentz, national and foreign cultural policy are directly intertwined. The Goethe-Institut is already increasing its representation within Germany, with events such as the Weimar Cultural Symposium.

Goethe-Institut's 70th anniversary program in Berlin is another demonstration of this approach. On November 29, the multimedia exhibition "Take Me to the River," offering artistic takes on global environmental changes, opens at the Hamburger Bahnhof museum, alongside the exhibition "Nation, Narration, Narcosis," which explores the role of museums in the culture of remembrance.

Finally, the interactive installation "Vanishing Wall," on show in the Reichstag building, is an exploration of European diversity.

Goethe-Institut: looking back on a turbulent year, while planning for 2018

With its language courses and cultural events, Germany's Goethe-Institut is reaching out to an ever increasing number of people worldwide. But according to its yearly press conference, it's not welcome everywhere.

On decolonizing school books, the internet and mindsets

The Goethe-Institut embarks on a new journey

Exhibition 'Take Me to the River'