Witnesses in Munich reported chunks of ice the size of tennis balls hitting the Bavarian city, breaking car windows and damaging houses. Other parts of Germany were also hit by storms. 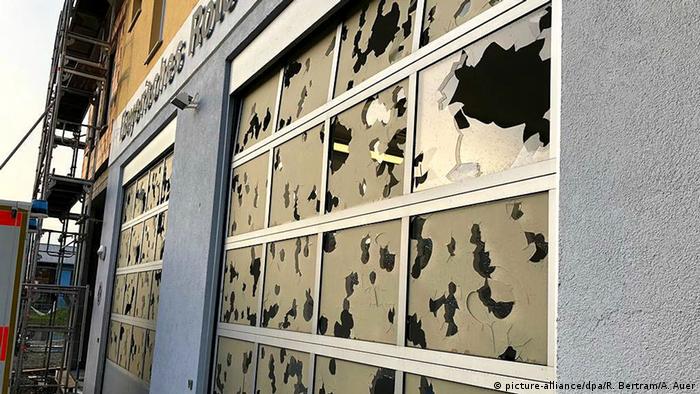 Several people, including a 7-year-old child, were injured in a hailstorm that hit southern Germany on Monday, police in Bavaria said. Houses were flooded due to heavy rain and damaged by hail, which meteorologists described as being 5 centimeter (nearly 2 inches) in size.

Some witnesses, however, reported hail the size of tennis balls (over 6.5 centimeters) pounding cars on a federal highway in Bavaria, smashing car windows and side mirrors. "Chunks of ice were hitting us like gunshots," a Munich driver said.

"We exited the highway, in the towns you could see roof tiles on the street," she added, according to the German DPA agency. "The streets were green with broken-off branches and leaves."

Bavarian residents shared images and videos of the storm on social media.

Others posted videos of hail pounding residential areas in the city.

Monday storms also lashed various other parts of Germany, including the northwestern city of Mönchengladbach, where heavy rain flooded basements and caused streets to run with water. Hail and rain also reached the eastern German state of Saxony.

Weather experts warned strong storms could continue on Tuesday, with the country's capital Berlin likely to be affected. According to local radio Rbb24, meteorologists from the national weather service Deutsche Wetterdienst and private MeteoGroup foresee hail between 3 and 5 centimeters in diameter and gusts of wind up to 120 km/h  (75 mph) in Berlin and nearby Brandenburg.