Germany's Defense Minister Ursula von der Leyen has urged NATO states to adhere to the two-percent target for military spending. She was speaking on the 60th anniversary of West Germany joining the alliance. 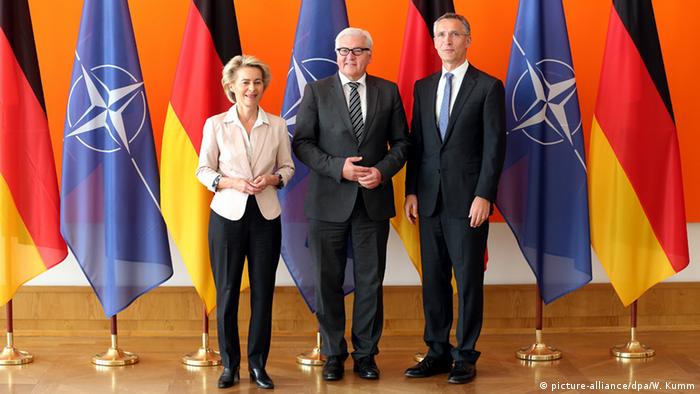 Speaking in Berlin on Tuesday, von der Leyen (pictured above, left) warned the NATO members against fixating purely on the target of spending two percent of gross domestic product (GDP) on military spending.

"In the future, the two percent target cannot be the measure of all things," von der Leyen said, saying that the results of increased expenditure should be the decisive factor.

The Christian Democrat said that Germany would aim to increase its annual defense budget to meet NATO's target, following an appeal from Jens Stoltenberg, NATO's secretary-general.

"We will reach for this target. Security needs investment," von der Leyen said.

The question facing the allied military organization, Von der Leyen said, is how the deployment, the ability to keep forces on the ground and the equipment of the military can be changed.

"Then the map would look very different to the one we currently have in front of us," she said.

This year only five of the 28 NATO countries achieved the two percent target. Germany missed the goal, spending 1.2 percent of the country's GDP on defense.

Germany already plans to increase defense spending from 33 billion to 35 billion euros per year ($39.25 billion) by 2019, but such an increase would still leave it well short of the NATO target.

"The good news is that tomorrow ... the cabinet will decide on a budget, which, keeping the defense budget in mind, will reverse the trend of declining military spending," von der Leyen said.

Stoltenberg, who said Germany was "always a very strong partner" in its 60 years as a NATO member, welcomed Tuesday's pledge, but added that nobody expected the increase in spending "to take place in the next year."

Germany's Foreign Minister Frank-Walter Steinmeier supported the increase in defense spending on Tuesday, saying that "more is expected from us Europeans." Like von der Leyen, however, the Social Democrat stressed that efficient spending of resources was crucial; the German military is currently battling a string of problems with its equipment and vehicles.

Leaders from around the world have condemned terror attacks at a Tunisian resort, a mosque in Kuwait and a factory in France. Muslim clerics said the attack was a "violation of all religious and humanitarian norms." (26.06.2015)