Shrill, campy and brutally honest: Director Rosa von Praunheim is a pioneer and icon of gay rights in Germany. The tireless filmmaker's latest movie is released as he celebrates his 75th birthday. 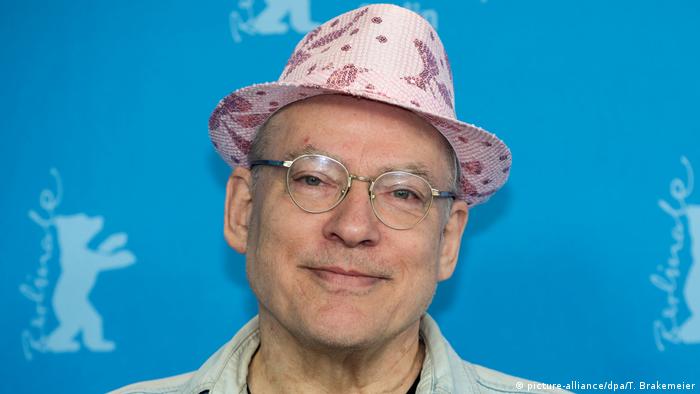 "Hello freaks, film friends and perverts! I was one of the first in the world to make a gay rights film after World War II, and I can say in all modesty that I'm probably the most productive gay filmmaker on Earth," Rosa von Praunheim confidently writes on his website.

He is definitely the most hard-working one. Von Praunheim has directed about 80 feature and documentary films to date, as well as countless short videos for television.

He initially didn't even want to become a filmmaker, as he preferred painting. But he quickly noticed that he could reach a larger audience with his movies.

Rosa von Praunheim was born Holger Radtke on November 25, 1942, in a prison in Riga, during the German occupation of Latvia. Shortly after his birth, he was adopted by the Mischwitzky family, who brought him to East Berlin. The family lived in East Germany until they escaped to Frankfurt in 1953.

The young Holger developed an early interest for the arts. The first play he directed in high school was in Latin. He then studied at an art school in Offenbach and later at the Berlin University of the Arts. 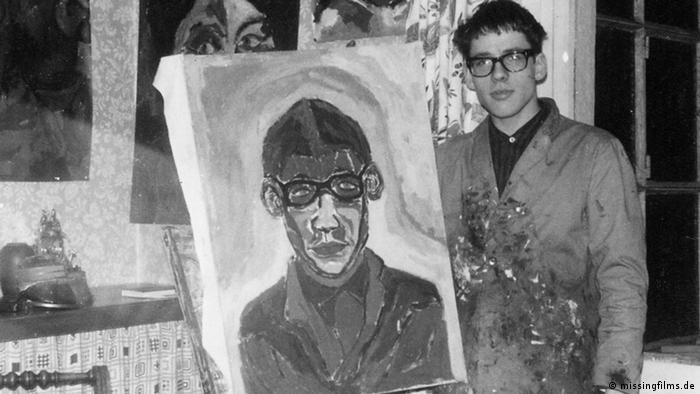 A self-portrait, as presented in his film "Praunheim Memoirs"

It was around that period that he assumed his stage name, "Rosa von Praunheim." Rosa — German for "pink" — was a reference to the pink triangle homosexual prisoners had to wear in concentration camps, while Praunheim was the name of the district in Frankfurt where he lived as a teenager.

Pioneer of the gay rights movement

He directed his first short film in 1967. A year later, he received an award for "Rosa Arbeiter auf Goldene Straße" (Pink Workers on Golden Street).

He became "famous and notorious," as he likes to say, with his 1971 film, "It Is Not the Homosexual Who Is Perverse, But the Society in Which He Lives." The title alone was already an unheard-of message in West Germany at the time. Even though the law criminalizing homosexual acts had just been reformed in 1969, homosexuality was still taboo for most Germans and the word "schwul" (gay) was used as an insult. 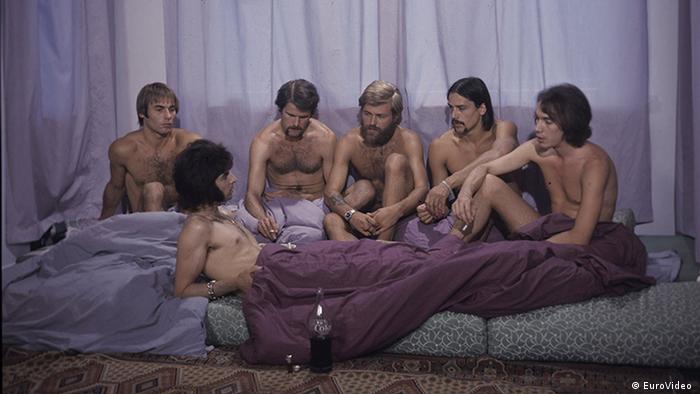 He broke taboos in West Germany with "It Is Not the Homosexual Who Is Perverse, But the Society in Which He Lives" in 1971

The filmmaker's parents discovered that their son was attracted to men through this movie as well. This coming-out was a personal liberation for the artist, which he transformed into a wake-up call for all homosexual men. "I didn't like gays who were completely apolitical and remained in the closet, who would find escape in parties instead of supporting the movement," said von Praunheim. "I was angry at all the coward gays who would run away when chased by homophobes, instead of resisting as a group."

Read more: Berlin is gay, and that's a good thing

With the film, Rosa von Praunheim became an instant icon of the gay and lesbian movement in Germany. He called homosexuals to "Get out of the restrooms and onto the streets!" and that encouraged countless people to reveal their sexual preference publicly.

Within a short period, 50 gay rights groups were formed in West Germany.

Von Praunheim became a star — in the art world as well. In 1972, his film was shown at the Documenta in Kassel.

The filmmaker pursued an unparalleled career and has won numerous awards. His films are campy and controversial, but often surprisingly peaceful and poetic. Many of them have gained cult status.

That was already the case with his first feature film from 1970, "Die Bettwurst" (The Bolsters), a parody of bourgeois marriage. He also explored realities beyond his home country, directing, for instance, the documentary "Survival in New York" (1989) and its sequel, "New York Memories" (2010).

The battle against AIDS

In 1985, he directed "A Virus Knows No Morals." Instead of dealing with the issue of AIDS with what he called "a pity film," he chose to do so with a black comedy. With the work, he aimed to entertain while raising awareness. "Many people criticize safe sex, because they believe the virus was created by the CIA and Germany isn't threatened by it — as long as you avoid unprotected sex with Americans," the filmmaker reported at the time of the release of this movie. 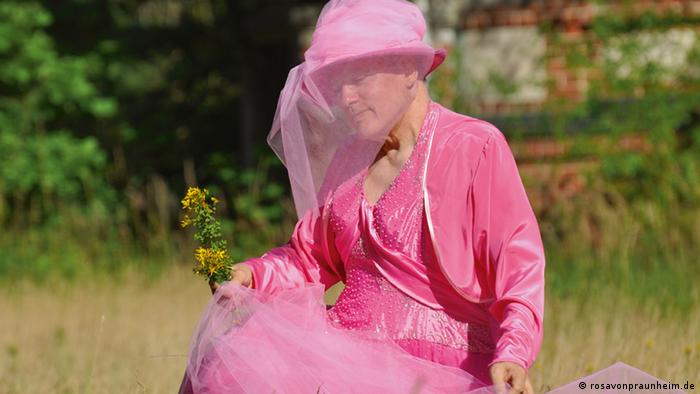 He plays in many of his own movies: Rosa von Prauheim in "Der fröhliche Serienmörder" (The Happy Serial Killer)

He continued addressing the issue afterwards, creating an AIDS trilogy in 1990.

While denouncing discrimination against people with AIDS, he outed two popular TV public figures, comedian Hape Kerkeling and TV host Alfred Biolek, on a TV talk show watched by some four million viewers. It become one of the greatest scandals of German TV history. "It was a cry of despair at the peak of the AIDS crisis," explained Rosa von Praunheim later. He wanted to incite closeted people to move and show more solidarity with the gay community, which was strongly affected by AIDS and HIV.

Along with films dealing with homosexuality, the director has also centered many of his works on older women. 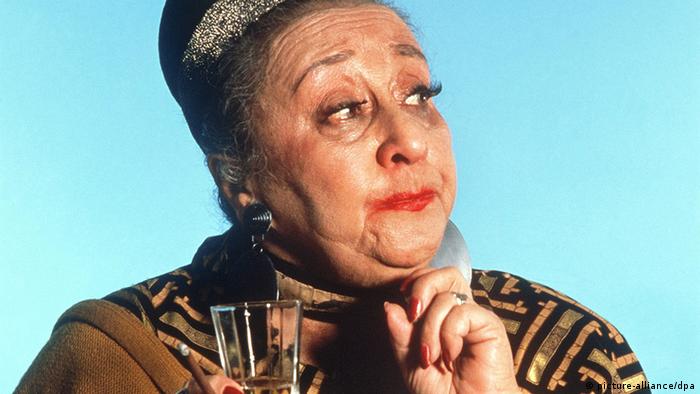 The artist further explored his own past in "Praunheim Memories" (2014), revisiting the streets of his youth.

'Still much to be done'

For his 70th birthday, renowned directors such as Tom Tykwer and Robert Thalheim participated in the documentary "Rosakinder" (Rosa Children), in which they discuss how Rosa von Praunheim's role as a "cinematographic father" and mentor.

Now, right on time for his 75th birthday, the tireless filmmaker releases another one of his films in theaters, "Survival in Neukölln." 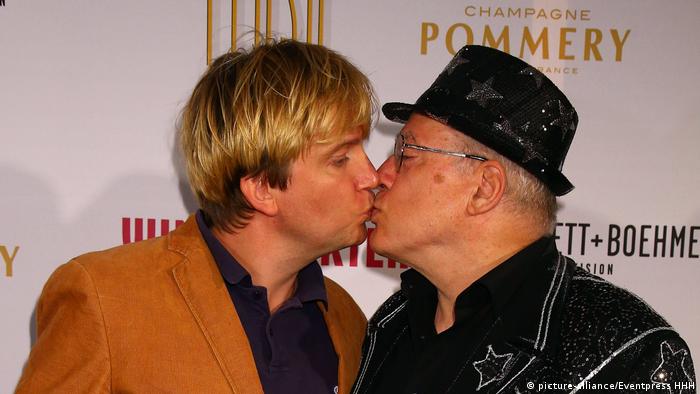 He has been with his partner Oliver Sechting for 10 years

Much has changed within the 40 years of Rosa von Praunheim's activist career. Since October 1, 2017, gay and lesbian couples can also get married. Isn't that a wonderful birthday present? "No, not at all," reacts von Praunheim. "We wanted something else. It's now moving towards conformance and 'let's do like the heteros,' but that wasn't the plan."

Another fact disturbs him even more: "Many countries on Earth still criminalize gays. The situation is horrible for homosexuals in eastern Europe, in Africa and Asia. Churches vehemently fight against gays and lesbians. There's therefore so much to do for us and for me, in the short time I still have to live."

AIDS conference: US cuts could hurt fight against HIV virus