German Chancellor Angela Merkel is the world's most powerful woman, topping Forbes magazine's list of 100 women for the third year in a row. Both Condoleezza Rice and Hillary Clinton slipped in the ranking. 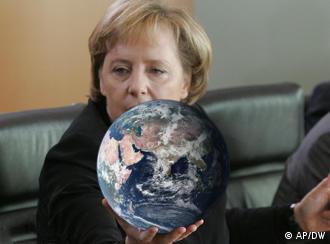 Merkel and Rice, who dropped three spots from last year to rank 7th in 2008, were the only politicians among the top 10 in the magazine's annual listing.

The other eight were business executives, including runner-up Sheila Bair, who chairs the US Federal Deposit Insurance Corps. Little known Bair made her debut on the list.

Merkel, the only German on the list, is also one of only four non-Americans in the top 10.

The chancellor's top ranking was also attributed to her bold approach to controversial issues, including her decision to meet with the Dalai Lama, chastise Zimbabwean President Robert Mugabe, and slash greenhouse emissions in Germany.

US Democratic senator and former presidential hopeful Hillary Clinton dropped three spots in the ranking to land at 28, despite claiming the most media attention of any woman on the list this year. However, Forbes also takes the women's career and economic impact into consideration.

Merkel Calls For Caucasus Summit Ahead of Baltic Tour

German Chancellor Angela Merkel has called for a summit of Georgia's neighbors following the country's recent conflict with Russia. On Monday, she heads to the Baltics to lobby for a more nuanced approach towards Moscow. (25.08.2008)

German Chancellor Angela Merkel expressed confidence that the European Union's Treaty of Lisbon will be implemented despite its rejection by the Irish electorate in a referendum last month. (24.07.2008)

German chancellor Angela Merkel is putting the nation's educational system on her list of domestic priorities in the run-up to a major nationwide education summit in fall. (13.06.2008)