German Chancellor Angela Merkel expressed confidence that the European Union's Treaty of Lisbon will be implemented despite its rejection by the Irish electorate in a referendum last month. 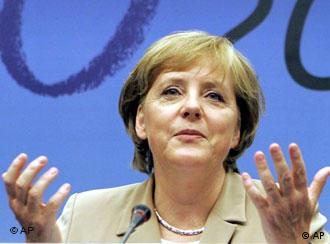 The EU can't expand without a new treaty, said Merkel

Referring to Croatia's membership application, Merkel said at a press conference on Wednesday, July 23, that further expansion of the 27-member bloc was not possible under the 2001 Treaty of Nice, which currently governs EU institutions.

"I am confident we will implement the Lisbon Treaty," Merkel said before going on summer vacation.

The Treaty of Lisbon, signed at the end of last year and currently undergoing ratification by the individual members, was necessary not only if the EU was to expand, but also to enhance democracy within the bloc and to make it more effective, Merkel said.

The Irish rejection of the Lisbon Treaty has left the bloc searching for a new way to move forward as the treaty must be unanimously ratified in order to go into effect.

Merkel was one of the driving forces behind the new treaty under Germany's EU presidency in the first half of last year.

The treaty faces obstacles in Germany, Poland and the Czech Republic.

German President Horst Koehler has said he will await a decision by the Constitutional Court on the treaty's compatibility with the German Constitution before signing into law the necessary legislation, which has been passed by both houses of parliament.

Leading European experts and politicians, including German Foreign Minister Steinmeier, told DW-WORLD.DE how they expect the newest round of European soul searching to end and shared their personal visions for Europe. (23.07.2008)

The Irish rejection of the Lisbon Treaty has sent shockwaves across the EU. But the treaty is still no lost cause, says German Foreign Minister Steinmeier in an exclusive essay for DW-WORLD.DE. (22.07.2008)

Britain has formally ratified the European Union's Treaty of Lisbon, the country's Foreign Ministry said in London. The beleaguered treaty's future is still in doubt after Irish voters rejected it last month. (17.07.2008)

A select group of citizens of the EU has gathered multiple times since last May to discuss what the bloc should look like in the years ahead. But implementing some of the ideas would mean overhauling how the EU works.