Claudia Neumann has made German TV history as the first woman to provide live commentary for men's soccer during the UEFA Euro games. Her presence, however, has sparked a social media storm, including violent threats. 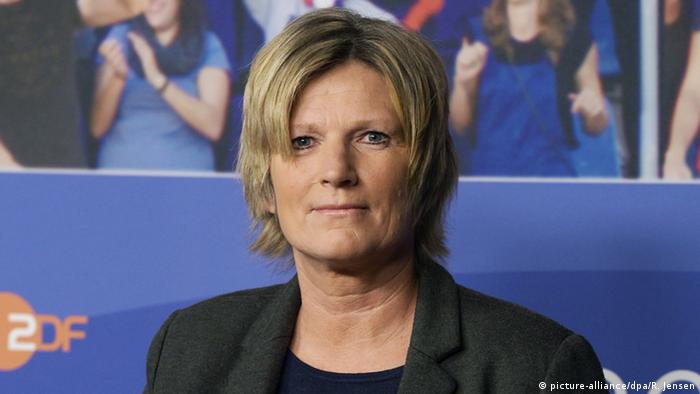 But her role as the match's main commentator enraged numerous soccer fans. Many of whom posted complaints about her "annoying voice" while others said women have no place doing sports commentary for men's soccer. One Twitter user wrote: "Women shouldn't commentate men's soccer. It doesn't fit. Annoying. Period."

Her Euro 2016 debut was the June 11 match between Wales and Slovakia. Following that first game, users insulted and attacked her with misogynistic slogans about "the place of women" and even rape threats.

Despite expecting some criticism following the games, the head of ZDF's sports department said he couldn't believe the "harsh formulation" of comments that appeared on ZDF social media sites.

In a post on the broadcaster's Facebook site, ZDF editors said numerous "offensive" comments had been deleted.

"If you cannot objectively take part in the discussion, we will block you," warned ZDF on Facebook, adding that "insults are not opinions and will not be tolerated according to our netiquette."

Stefan Leifert, a ZDF correspondent in Brussels tweeted a screenshot of some of the Facebook comments which included homophobic and sexually explicit remarks.

"Hey, people, it's only about football!" Neumann told SID in an interview, adding that the social media backlash against her "is all absolutely ridiculous."

"Most of those people weren't even born when I was already sinking bicycle kicks."

In 2011, she became the first female sports announcer on German TV for the women's World Cup - women's soccer, as well as men's, had until that point been dominated by male commentators.

When asked how she is coping with the deluge of online criticism following her first two Euro 2016 games, she said she hopes her work will make it easier for more women to break into the ranks of sports commentary.

"If it helps to eventually make it easier for a few younger female colleagues - okay. I can take it," Neumann said. "I've got thick skin.

"I won't let them break my passion and my profession," she added.

Fans stand up for Neumann

Many on Twitter and Facebook also praised Neumann's performance during the two Euro matches, including several members of the German media.

One user tweeted that the Italy-Sweden game had "two good things. 1. The refreshing commentary from Claudia Neumann. 2. The goal from Italy's team."

Kathrin Steinbichler, an editor for the German newspaper "Süddeutsche Zeitung" tweeted: "By the way, Claudia Neumann is one of the best and most knowledgeable colleagues. (She's) doing a super job at the Euro 2016."

Another twitter user praised Neumann's voice and called her a "hero."

Although Neumann was only slated to make the commentary for the tournament's group rounds, some on social media are campaigning for her to take over the Euro 2016 match final.

The ability to provide commentary during an important soccer game "is not a question of sex, but a question of competence," read an online petition calling for her to commentate on more matches.

A temporary worker at London's PwC office sent home for wearing flat shoes has organized a petition for parliament to hold a debate. In Cannes, Julia Roberts took her shoes off altogether in protest at the dress code. (13.05.2016)

In a painful new video, normal men are forced to read the online comments that are written to female sports journalists. The video has opened a huge discussion about online harrassment against women. (28.04.2016)