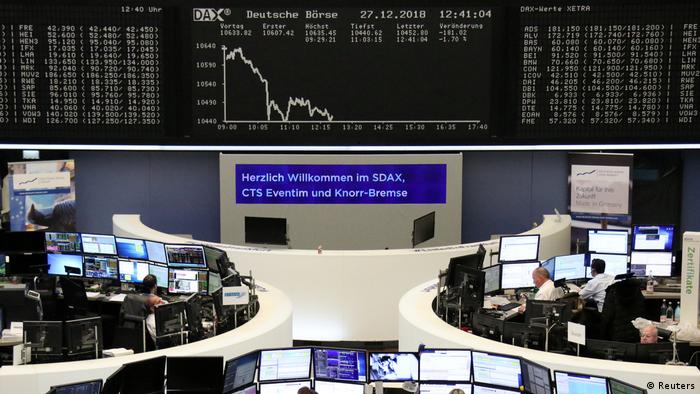 German equities failed to benefit from Wall Street's bumper post-Christmas rally on Thursday, with the DAX index shedding a hefty 2.4 percent at the close to 10,381 — at one point plunging more than 3 percent.

German pharmaceutical, chemical and life sciences giant, Merck, was Frankfurt's worst performer, seeing a whopping 4.46 percent wiped off the value of its shares.

The selloff took Germany's benchmark stock index to a two-year low, a fall of 20 percent since the start of 2018.

The rebound heightened the euphoria caused by Wednesday's record one-day rally, which saw the key index make its largest intraday gain in history — a 5 percent rise.

Traders credited the last-minute surge, during the final 30 minutes of trading, to end-of-year bargain hunting.

For much of Thursday afternoon, the Dow, S&P and Nasdaq were down close to 2 percent as ongoing political turmoil in Washington over the partial shutdown of the US government continued to weigh on investors' minds, along with a new US consumer confidence report, which saw a steep decline in December.

The Conference Board's consumer confidence index fell more than eight points, the most significant change in any direction this year, to 128.1, the survey showed.

Earlier in the day, Tokyo's equity market surged but Chinese stocks slid on weak data showing that profits in the industrial sector had declined 1.8 percent in November.

The data pointed to a further loss of economic momentum in the world's second-largest economy as a trade dispute with the United States lingers.

Global equity markets have had a rocky month spurred by the trade tensions, Britain's planned exit from the European Union in March and US President Donald Trump's attacks on the Federal Reserve.

Despite reports that a US government delegation will travel to Beijing in early January to hold fresh trade talks, Hussein Sayed, a strategist at online brokerage FXTM, told the Reuters news agency that the ongoing spat "remains the biggest unknown factor for 2019."

Gold, meanwhile, was set for its biggest monthly increase in almost two years, with many investors seeking havens amid intensifying global economic woes.

The US Fed arms itself for falling growth

The US central bank has raised interest rates once again — not to annoy the American president, but to prepare for an uncertain and bumpy economic future. (20.12.2018)