The highest representative of the Catholic Church in Germany has urged reconciliation between Christians and Muslims. Cardinal Marx's remarks come as the issue of the place of Islam in Germany comes under renewed debate. 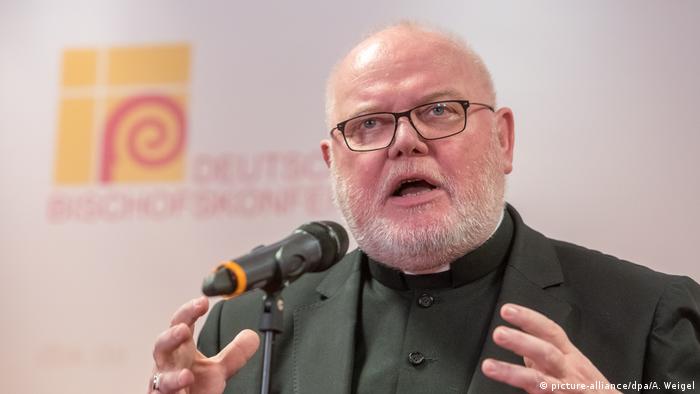 Cardinal Reinhard Marx, the head of the German Bishops' Conference, has called on Christians to seek contact to Muslims and non-believers in view of what he described as an era of "verbal, political and military  rearmament."

In comments to be delivered at a religious procession in Munich on the Christian holy day of Good Friday, Marx said Christian believers should say "no" when hate and violence were preached and condemn attacks on churches, synagogues or mosques.

He urged those of the Christian faith to go the path of non-violence and love when encountering people of other religions or those who professed no faith.

"For we know from our own experience as Christians in Europe and the world: Without friendship, without encounters, without openness for others, there is no understanding, no reconciliation, no community, but instead the creation of mistrust, fear and violence," he said.

Read more:  Are immigrants unfairly portrayed in the media?

He also warned of a growing rhetoric of winners and losers and an increased reliance on weapons to assert national interests.

"People want to create peace with more and more weapons, they say. Where is that to lead? I cannot accept a logic of this kind," he said, adding that Christians were called upon to advocate peace and non-violence.

Marx's comments come amid renewed debate about the role of Islam in Germany, sparked by recent remarks made by Interior Minister Horst Seehofer of the Bavarian Christian Social Union (CSU), who maintained that the religion did not "belong to Germany."

Seehofer's assertion echoes similar statements made by the right-wing populist Alternative for Germany (AfD) party, which campaigned on an anti-immigration platform in last year's federal election and is now Germany's largest opposition party.

However, Seehofer's remarks met with criticism across the rest of the political spectrum and are at odds with the view espoused by Chancellor Angela Merkel.

In addition to his position as head of the German Bishops' Conference, Marx is also archbishop of Munich and Freising in the southern state of Bavaria where Seehofer's conservative CSU is rooted.

Germany has seen a recent rise in anti-Muslim and anti-Semitic incidents, which some see as symptomatic of rising nationalism across Europe and the world.

Read more:  6 facts about Catholic and Protestant influence in Germany

Cardinal Lehmann, who held the highest representative post of the Catholic Church in Germany for 21 years, has died. He has been described as a "bridge-builder" between the religions. (11.03.2018)

Chancellor Merkel led the response to the new interior minister's remarks, saying the 4 million Muslims living in Germany and their religion belong in the country. SPD ministers called for practical integration measures. (17.03.2018)