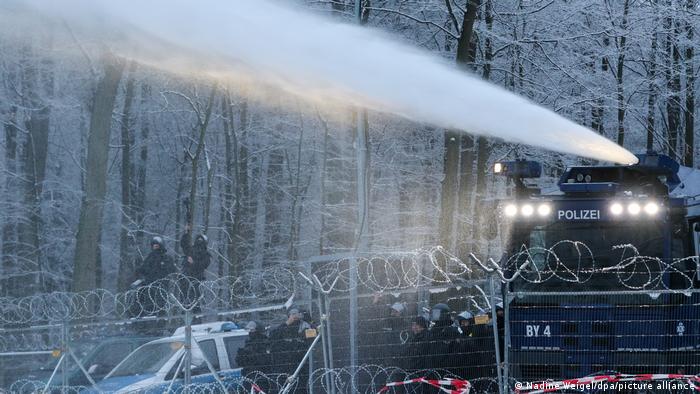 Police in central Germany on Saturday deployed a water cannon in an effort to disperse environmental protesters who are refusing to leave the Dannenröder forest, which is set to be cleared for the expansion of the A49 autobahn.

As demonstrators rebuilt barricades, lit pyrotechnics and blocked the emergency road for a nearby logistics warehouse, police moved in with a water cannon.

It was initially unclear whether there were injuries.

A Twitter account set up by activists complained that the use of the water cannon in freezing temperatures was "irresponsible." 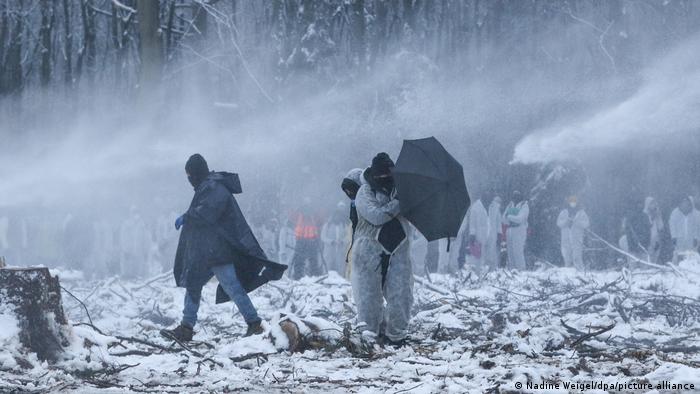 Thousands of environmental activists have protested and some set up treehouses in the forest, northeast of Frankfurt, for more than a year to oppose plans for the expansion.

Authorities began an effort to remove protesters last month, ahead of the clearance of some 85 hectares of land that would allow the extension of the A49 so that motorists can travel directly between the cities of Kassel and Giessen.

Since the clearing work began, there have been several clashes between police and protesters, with violence and injuries reported on both sides.

Authorities have also complained that arrested protesters have gone to extreme lengths to hide their real identities, including supergluing their fingertips to prevent them from giving fingerprints.

Hesse's Office for the Protection of the Constitution, the state's domestic security agency, has warned that left-wing extremists can be expected to "steer the protests in a non-peaceful direction and to commit further criminal and violent acts."

Plans for several extensions to the autobahn have caused friction with local residents and environmental campaigners for decades.

A proposal for the highway to run through another nearby forest was rejected due to conservation concerns.

Italy's outgoing government has set a three-year strategy to fight anti-LGBTQ discrimination amid fears of a roll-back of rights under the upcoming right-wing rule.

A Russian court has reportedly ordered that Memorial's office in Moscow "become state property." The move came hours after the rights group, which was disbanded last year, won the Nobel Peace Prize.

The UK offered to host on behalf of the Ukrainian winners Kalush Orchestra, whose country has been invaded by Russia. The band supported the choice, adding that they knew Liverpool would honor their homeland.