The Air Namibia and Korean Air planes were slightly damaged in the mishap on the ground. Germany's Federal Bureau of Aircraft Accident Investigation (BFU) has launched an investigation. 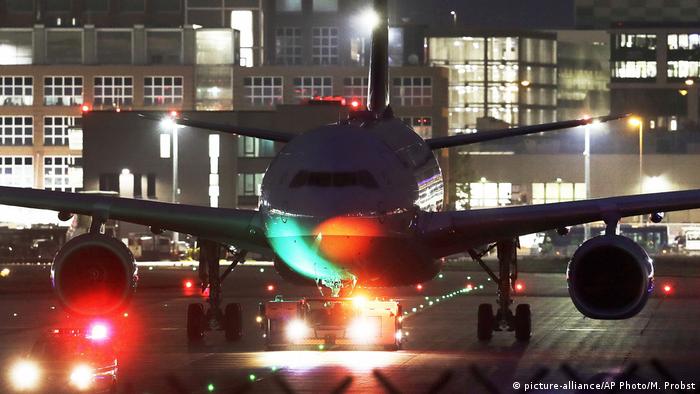 A Korean Air Boeing 777 aircraft collided lightly with an Air Namibia aircraft after landing on Saturday at 6:20 p.m. (1720 GMT).

The horizontal stabilizer on the Korean jet and the wingtip of the Namibian plane were both damaged, according to the Korean news agency Yonhap.

There were no reports of injuries as the Air Namibia plane was "moving at low speed on the ground," the agency said, citing the Korean carrier.

The Korean plane — which was scheduled to make a return flight to Seoul — was delayed as a result of the incident and passengers were offered hotel accommodations, reported the Frankfurter Allgemeine Zeitung newspaper.

The flight was rescheduled and was expected to take off some 21 hours later than originally planned.

The German Federal Bureau of Aircraft Accident Investigation (BFU) launched an investigation into the collision, the Hessenschau news portal reported.

Lufthansa passengers can breathe a sigh of relief after the airline and cabin crew trade union UFO announced there are no new strikes on the horizon. The two sides agreed to enter arbitration to resolve wage disputes. (12.11.2019)

Southwest Airlines grounded two Boeing 737 airplanes on Wednesday after finding cracks in a part of the wings. Boeing is still dealing with fallout from two deadly crashes due to technical failures in the last year. (10.10.2019)

All flights in and out of Germany's busiest airport had been halted on Thursday morning after a drone was spotted. Police said the issue had been resolved, but declined to give further details. (09.05.2019)

Dutch military police were dispatched to Amsterdam's Schiphol Airport over a "suspicious situation" on an Air Europa plane. The airline later said the incident was a "false alarm" accidentally triggered by the pilot. (06.11.2019)

The Saki base went up in flames, with Russia claiming an ammunition depot exploded, a story ridiculed by Kyiv. Russia says Switzerland is no longer neutral and cannot represent Kyiv in Moscow. Follow DW for the latest.