The film "God," aired by German broadcaster ARD, poses questions on assisted suicide for a 78-year-old man who has lost the will to live. Over 70% of viewers said doctors should give him access to a lethal drug. 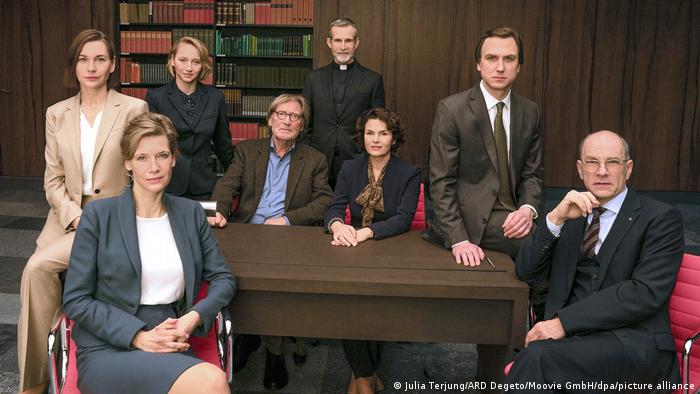 A majority of German television viewers voted in favor of assisted suicide for a movie protagonist, according to a poll issued by the Germany's public broadcaster ARD during the airing of the film God.

The movie focuses on a fictional ethics council while it is mulling over the desire of the main character, 78-year-old Richard Gärtner, to die. Gärtner, portrayed by veteran German actor Matthias Habich, argues he has lost the will to live due to the death of his wife.

On Monday evening, viewers chimed in over whether a healthy person had the right to ask their doctor for access to a deadly medication. Just over 70% of viewers voted in favor of allowing euthanasia, while 29.2% were against offering access to the lethal drug. The movie was also shown in Switzerland, where around 68% also endorsed the right to euthanasia.

In the film, several parties representing a range of perspectives sat around a hearing to debate the issue. Those figures included the fictional character Gärtner, his lawyer, a doctor, a law professor and a bishop. The chairwoman of the ethics council also repeatedly addressed the audience in the film, urging them to consider the dilemma and vote.

The disputed question was not over which forms of euthanasia doctors may use, but rather, whether doctors have an obligation to meet a patient's wish of ending their own life, regardless of their age or health.

The film is based on the play Gott by Ferdinand von Schirach, which was shown in September in Berlin and Düsseldorf. The text poses several existential questions, including who a human life belongs to, and if the age of a person matters when they are choosing to end their life.

At the end of the movie, the ethics council doesn't give a definite moral stance and instead leaves the outcome open.

In February, Germany overturned a five-year-old ban on medically assisted suicide, again legalizing the procedure for terminally ill patients. The disputed law, which made "commercial promotion of assisted suicide" a criminal offense, had pushed several terminally ill people to go to Switzerland and the Netherlands to end their lives.

The 2016 movie showed the court finding the fictional pilot not guilty in accordance with the audience wishes.

In western India, almost an entire Muslim village is asking Gujarat's High Court for permission to die. DW Correspondent Nehal Johri traveled to the state to see for herself what prompted this petition.

The chairman of a Dutch organization that lobbies for people's right to end their own lives has been detained. In the Netherlands, it remains illegal for somebody who is not a physician to assist in suicide.

Austrian lawmakers have approved a law that legalizes assisted suicide for seriously ill people, subject to tight rules. A law banning the practice was set to expire, which would have left the matter unregulated.