Germany set for another round of touchy talks with China | Germany | News and in-depth reporting from Berlin and beyond | DW | 31.05.2016

Bloggers, activists and dissidents are under a lot of pressure in China. In two weeks' time, Germany will be holding its next round of intergovernmental consultations with China, headed by Chancellor Angela Merkel.

German Justice Minister Heiko Maas will be taking part in the consultations, and DW's Amrita Cheema asked him whether issues such as freedom of speech really play a role in the bilateral talks.

Heiko Maas: This always plays a role when we talk to the Chinese government. Of course, Germany also has business interests in China and its own vested interests, which relate to the independence of the rule of law and the respect of human rights, and therefore it is important to stay in dialogue with China, because only on that basis will we be able to raise the issues that are important to us.

There needs to be more freedom for artists, and there are human rights lawyers, who need to be able to pursue their profession without fear of repression - unfortunately that is not the case.

DW: What do you make then of the new law that was passed in April restricting the activities of NGOs, which will also affect German NGOs working in China. You were very critical of the law when it was under discussion last year. Now it has been passed - what consequences will that have? 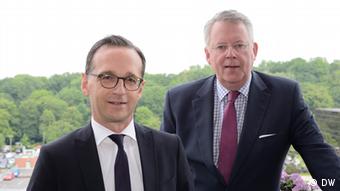 This is a topic, which unfortunately pertains not only to China, but also to other countries, like Russia, or Israel for example. They have NGO laws which are called transparency laws. What they mean is they want to see who is behind NGOs, who has interests there and who can exert pressure. We have always been critical of that and it is also going to be a topic in the consultations that are coming up. But, as is always the case, at the end of the day we will not be able to convince the Chinese government not to do things that are not in keeping with our understanding of the rule of law. But that does not mean that this topic will be pushed aside. We want independent organizations and German foundations who work in China to pursue their activities there.

China is very touchy and sensitive to criticism, and as you mentioned Germany has vested interests, business interests, trade relations with China. So to what extent can Chancellor Angela Merkel push China on human rights?

I believe that Germany is also important to China. The chancellor has made this very clear on numerous visits that we come not only for business reasons; but that human rights, rule of law and the justice systems are important topics.

In addition to that, we have been having a human rights dialogue for many years. We have been meeting in Beijing and this year we will be meeting in Germany and the topics are critical for China. Last year, we talked about domestic violence against women and the result was a law that has been passed in China. This year we are going to talk about consumer rights in the digital age. Freedom on the internet is another issue which is not unproblematic in China and we believe by making small steps - and when it comes to consumer protection or human rights and rights of citizens - that by making small steps we have to continue working on that basis.

We have to stay in a dialogue with the Chinese government. And with these small steps forward we can make progress. The alternative when you look at the human rights situation or the judiciary system - which is far away from what we know and from our own system - of not talking to China is not an alternative because we don't believe that this would be to the benefit of anybody. So, therefore, we meet with activists and human rights lawyers and talk about their situation and to make clear that the German government pays close attention to their situation.

You were in China last year for the discussions about human rights and the rule of law in China and shortly after that two hundred lawyers were detained in China and some of them are still in detention. Don't you get the impression that China listens to you politely when you're there and once you're gone they do what they want? 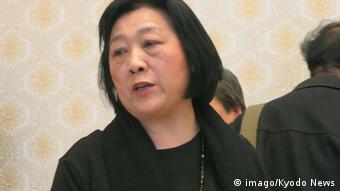 DW journalist and political dissident, Gao Yu, is very ill and under house arrest in China

Yes, that's an impression that can arise and last year indeed it was the fact that we discussed the rights of lawyers and afterwards a lot of them were detained. Many of them have been set free again, but not all of them. And the legal profession is not free of repression and therefore this is going to be another topic in the intergovernmental consultations on the agenda. We will talk about a stronger link between German lawyers and Chinese lawyers.

There are projects that have been initiated by the lawyers association in Germany so that they can have immediate contact with their counterparts and initiate projects. We also have a project for the training of judges and we want to make contributions not only to the training of lawyers but also to an ongoing discussion between lawyers. We want to dismantle hurdles and we need to enable lawyers working in China to talk to their counterparts in Germany and to lawyers associations. That is a direct result of what happened last year.

What about political dissidents? Some of them have made international headlines, like Ai Weiwei, who is now living in Germany. When you go to China in two weeks' time will you be raising the issue of other cases, for example, that of Gao Yu, who is a journalist under house arrest and is reportedly very ill, but not allowed to leave the country. She also works for Deutsche Welle. Will you be raising her case?

Already last year when we were in China we talked with the government there about this topic and it will be a topic we will continue focusing on and it is also raised by the foreign ministry, by Foreign Minister Frank-Walter Steinmeier. Some things have been achieved, but not everything we wanted to achieve. So therefore the topic will stay on the agenda.

In the past we have met with human rights lawyers and asked them whether it is good for us to meet - or whether that would just trigger additional repression. And they said no, it is good to meet and they asked us to post photos on the internet of those meetings and they said that would help them because that makes clear that the German government is interested in the fate of these lawyers and that strengthens the position of these lawyers rather than being detrimental to them. So, therefore, we are going to continue this practice.

Heiko Maas is the justice minister of the the Federal Republic of Germany.

This interview was conducted by Amrita Cheema.