Germany Sells Submarines to Israel | Germany | News and in-depth reporting from Berlin and beyond | DW | 21.11.2005

As something as a good-bye gift, the outgoing government of Chancellor Gerhard Schröder will sell Israel two "Dolphin" submarines at a deeply discounted price. 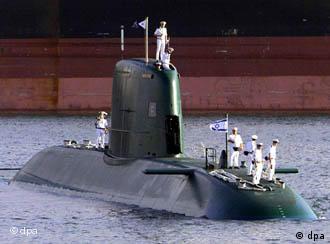 According to reports in the newsmagazines Der Spiegel and Focus, the two Dolphin-class magazines will be built in Kiel for a total of one billion euros ($1.17 billion). The federal government of Gerhard Schröder, which is leaving office on Tuesday, will pick up one-third of the cost.

The sale was agreed up on in a secret meeting of the Federal Security Council. Even outgoing Foreign Minister Joschka Fischer, a member of the once-pacifist Green Party, agreed to the sale. However, he will not sign the agreement himself on Monday, but is sending a deputy.

Germany, which is a staunch supporter of Israel, had already given two Dolphin submarines to the Israeli navy after the Gulf War in the early 1990s. The navy later bought a third at a greatly reduced price. Schröder's government had long been hesitant about selling additional subs to Israel, fearing that the country might arm them with nuclear weapons and further threaten Middle East stability.

The news reports say Germany had long resisted supplying the new submarines at a reduced price. Israeli security sources confirmed that questions over the price tag had delayed the sale, according to Reuters.

The new submarines will be outfitted with fuel cell engines that will allow them to remain submerged for weeks at a time. They will be constructed in the Baltic Sea coastal city of Kiel.

The sale will be the second major and long-delayed arms sale that the Schröder government is completing in its final month in office. Two weeks ago, it agreed to sell 298 surplus Leopard 2 battle tanks to Turkey.

In 2003 Germany quadrupled its weapons sales abroad to €1.3 billion and set a new record. The country’s churches are alarmed by the development, pointing out that some of the purchasers are questionable. (Dec. 16, 2004)