The number of new daily infections is at its highest level since January 22, according to the latest figures from the Robert Koch Institute for infectious diseases. 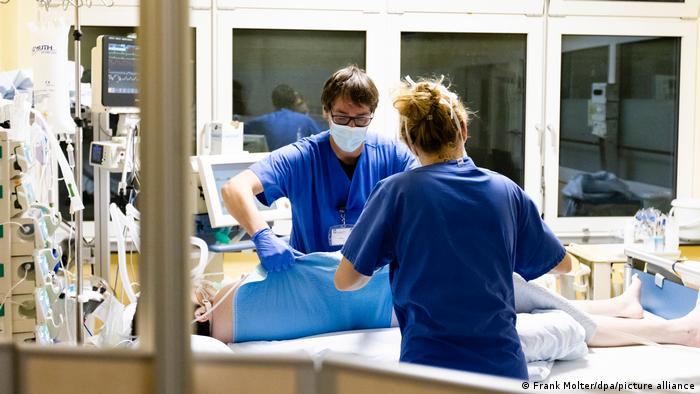 Germany has recorded its highest number of new COVID-19 infections since January, according to data published by the Robert Koch Institute (RKI) for infectious diseases on Thursday.

Germany began to relax lockdown restrictions at the beginning of March. If the infection rate stays above 100 for three days in a row then an emergency brake will allow authorities to reimpose lockdown measures.

The RKI has said that Germany is now in a third wave of infections — made worse by the spread of more contagious variants of the virus — and predicted a big jump in cases.

How many people have been vaccinated against coronavirus in Germany?

While infections continue to rise exponentially, the number of deaths associated with COVID-19 has trended downward throughout March. The RKI reported 227 new coronavirus deaths on Thursday, down from 321 the previous Thursday and 359 the week before that.

Germany has been slammed for its faltering vaccination drive. Chancellor Angela Merkel said that all Germans will have been offered a vaccine by the end of September, but so far only 8.4% of the population — almost 7 million people — has received at least one dose of COVID-19 vaccine. The share of people who had been fully vaccinated was at 3.7%.

The German government's vaccine dashboard reported that 198,421 people were vaccinated on Wednesday.

The health ministry suspended the use of the AstraZeneca vaccine on Monday, citing reports of unusual blood clots among people who had received the vaccine — critics have said that the suspension threatens to slow down the national vaccination campaign.

What will the German government do next?

The relaxation of lockdown restrictions was agreed upon by Chancellor Angela Merkel and the 16 heads of states within Germany in February. They are due to meet again to discuss the next steps on March 22.

They will meet first on Friday to discuss the further rollout of the vaccination drive. Authorities are hoping that family doctors will be able to massively scale up the number of vaccines administered.

Germany, along with several other EU member states were also awaiting a regulatory decision on the safety of the AstraZeneca vaccine by the European Medicines Agency on Thursday.

Experts have also warned the government about the problem of relying on infection incidence rates saying that more tests mean more positive results even as cases among older people decline due to vaccinations.

"This figure is highly problematic," Juergen Windeler of the Institute for Quality and Efficiency in Health Care told local newspapers.