Germany remembers dawn of democracy in Reichstag | Germany | News and in-depth reporting from Berlin and beyond | DW | 19.03.2021

On March 21, 1871, the German parliament convened in the Reichstag for the first time, exactly 150 years ago. It was an important step to democracy, though the chamber did not hold the German Empire's real power. 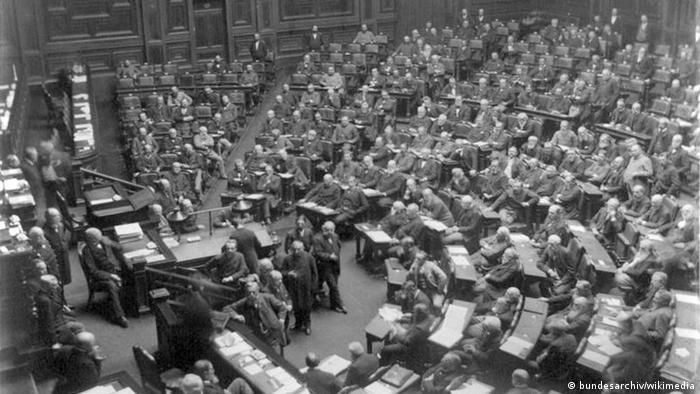 Through its legislative activity and its resonance with the public, the Reichstag became increasingly emancipated

The Bundestag today is the calling card of German democracy. Housed in Berlin's Reichstag building, topped with a glass dome symbolizing political transparency, 709 elected members decide on laws and, amongst other things, the foreign deployments of the German military. They elect the German chancellor, keep tabs on the government's work and publicly debate the right political path. This is everyday democratic life today.

When the Reichstag met for its first session in Berlin on March 21, 1871, it was hard to imagine a representative body with such far-reaching powers. Power was primarily held in the hands of two men: Emperor Wilhelm I, also King of Prussia, and the Reich Chancellor he appointed, Otto von Bismarck.

Wilhelm became emperor with the founding of the German Empire on January 18, 1871. As Reich Chancellor, Bismarck directed the political affairs of the first German nation-state, which had emerged from a confederation of states under Prussian leadership. 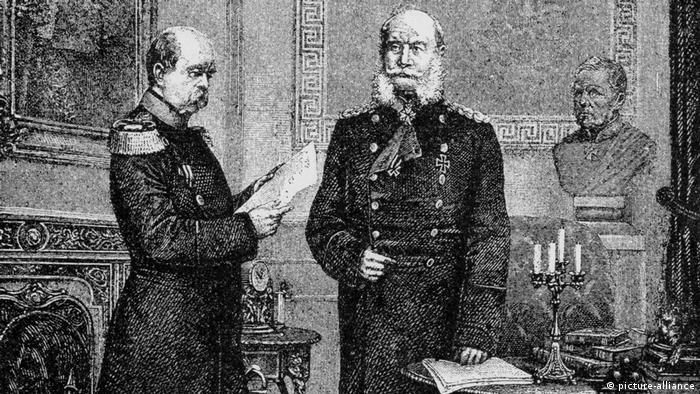 The imperial constitution, which was largely designed by Bismarck, granted far-reaching prerogatives to the monarchical executive: "The military, foreign policy, and the imperial administration remained largely removed from the influence of parliament and, above all, the appointment of the government depended (...) solely on the confidence of the emperor, not on the majority conditions in parliament," according to the Bundestag's explanation of the history of German parliamentarism. In this aristocratic world, citizens had one role above all: That of imperial subjects.

The apprenticeship of democracy

Nevertheless, the emperor and the imperial chancellor could not simply rule unchecked. "There had already been a parliament in Prussia since 1850, and they simply didn't dare ignore it," historian Christoph Nonn of Heinrich Heine University in Düsseldorf told DW. The German Revolution of 1848/49, which fought to democratize the German Confederation, was already "a clear signal that it was not possible without the population participating in politics."

Although the Reichstag was conceived as a kind of fig leaf for popular participation, "it never really was from the beginning, because the parliamentarians were very self-confident," Nonn explained. After all, parliament had a say in the implementation of laws and had budgetary authority.

"A government that did not get majorities in the Reichstag was practically incapable of acting because, with the exception of foreign and military policy, it could not legislate in any central policy area," Andreas Biefang of the Commission for the History of Parliamentarianism and Political Parties, a Bundestag research institute, told DW.

More power for the bourgeoisie

At first, the power of the Reichstag was still limited by the Bundesrat, which decided on laws alongside parliament. This assembly of imperial princes, largely controlled by Prussia, was intended as a kind of conservative bulwark to prevent democratic tendencies emerging from the Reichstag. To weaken the parliament's position, the emperor could dissolve the Reichstag with the consent of the Bundesrat.

But economic and social developments gave bourgeois co-determination a boost. "Industrialization, with the mass movements of labor, weakened the old rural aristocratic elites and strengthened the new industrial bourgeois elites," explained Nonn. "This led to the population becoming increasingly self-confident and demanding much more influence through their parties."

Through its legislative activity and its resonance with the public, the Reichstag became increasingly emancipated. Both the population and the government eventually accepted its political roles as an expression of popular opinion. To the same extent that the parliament became a symbol of the young nation-state, the Bundesrat became less important.

Despite their increased importance, however, the lives of Reichstag deputies were hardly enviable: For a long time, they received no parliamentary allowances, had neither staff nor their own offices.

The electoral system for the Reichstag also repeatedly fueled criticism. Due to the majority voting system and the division of constituencies, urban areas, where there had been a large increase in population, were significantly underrepresented. The conservatives benefited from this, while left-wing parties in the urban centers suffered. Moreover, in the early years, elections did not always have official ballots, voting booths or ballot boxes.

And there was a demographic and social imbalance. Only men who had reached the age of 25 were allowed to vote. Women and soldiers in active military service were excluded from voting for the Reichstag. So were recipients of poverty relief. "The reasons for this lie in the idea of the political maturity of male electoral citizens," explained Biefang.

Part of the idea was that one should have been economically self-sufficient, "while soldiers were forbidden civic rights so they wouldn't carry political conflicts into the army."

As a result, only about 20% of the population of the newly founded empire had the right to vote in the first Reichstag election on March 3, 1871, Biefang said. Turnout was 50%. By the German Empire's last Reichstag election before World War I in 1912, that had increased to more than 84%.

According to Biefang, voting became increasingly important to people. "They felt that participation in the Reichstag election mattered to them personally. And that was because many of the decisions made by the Reichstag affected their lives," says the historian.

Today's Bundestag can only dream of such interest. In any case, historian Nonn wishes the Reichstag's descendants more of the public attention and appreciation that the parliament of the empire received: "What was debated there was the talk of the day. At the barbers, at markets, in laundries — everywhere people talked about what was the issue at the Reichstag."

Today, he says, debates in modern parliament receive far less attention. In some respects, this leads to "members of the Bundestag doing things that they might not do if they were watched more closely," says the history professor, alluding to the recent lobbying scandal involving representatives of the conservative Christian Democratic Union (CDU).

With Germany’s Bundestag bursting at the seams, a special committee is meeting to try and prevent an oversized Parliament come the 2021 elections. But the coalition is split on how to do so. And time is running out.