Germany's foreign minister has called on the leaders of Iraqi Kurdistan to "peacefully" resolve disputes with Baghdad. Iraqi Kurdistan's premier instead urged Berlin to take a "stronger role" in resolving the conflict. 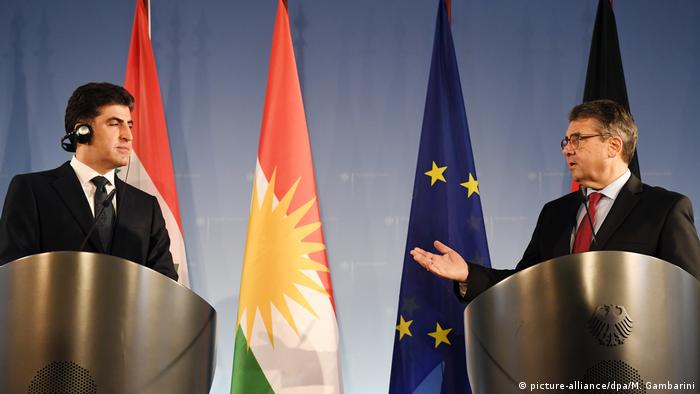 German Foreign Minister Sigmar Gabriel on Monday said Berlin's support for the Kurdistan Regional Government in Iraq was linked to "Iraq as a unified state" after meeting with Iraqi Kurdistan's premier, Nechirvan Barzani.

Berlin has provided more than €1 billion ($1.2 billion) in humanitarian and development aid to Iraq since 2014, making the country one of the largest recipients of German assistance.

"We want to continue that, but the precondition is that Iraq resolves its internal conflicts peacefully and democratically and that we find a way out of the tense situation we are in now," Gabriel said during a joint press conference.

The foreign minister told reporters that Germany had warned the regional government against holding a controversial Kurdish independence referendum, a move that triggered a violent response from Baghdad. In response to the Iraqi Kurdish government's refusal to annul the referendum, Iraqi-led forces launched a military campaign in parts of northern Iraq and recaptured several Kurdish-held areas, including the oil-rich province of Kirkuk.

Standing next to Gabriel, Barzani urged Germany to "play a stronger role in bringing us together." After meeting with the foreign minister, Barzani is expected to meet with German Chancellor Angela Merkel.

While Germany's parliament voted to extend the military mission, its mandate ends in March to allow the next government to determine its status.