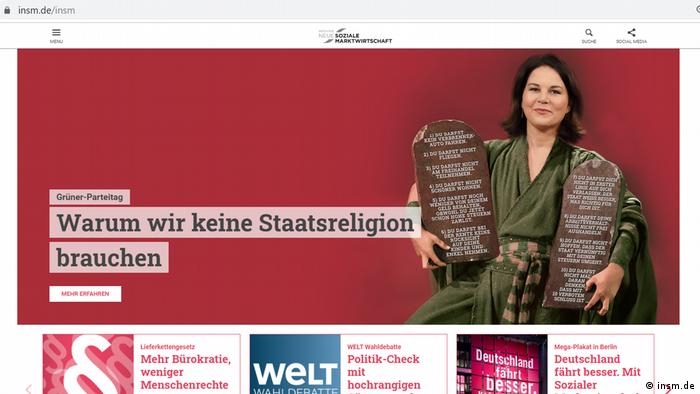 The artwork placed in major newspapers by the metal and electrical industry-funded Initiative New Social Economy(INSM) was captioned: "why we don't need a state religion," an allusion to Green policies on sustainable mobility, farming, energy and urban living.

One mock-up commandment read: " You may not drive a combustion-engine car;" and another: "You must not fly in aircraft."

The ads coincided with Friday's Berlin-based opening of the Greens three-day online congress to finalize their climate and energy plans for Germany's September 26 election that's likely to deliver a rejuggled multi-party coalition cabinet.

Confirmation of Baerbock as Greens chancellery candidate is expected on Saturday.

While Greens were expected during weekend debate to avoid being cast as moralizers — akin to 2013 "Veggie Day" antagonism they faced — theological experts decried Friday's INSM billboards as tending toward antisemitism.

"Equating a female candidate for chancellor with an oriental Moses figure, who allegedly wants to impose oppressive bans and a state religion; I cannot laugh at all," antisemitism commissioner for the southern state of Baden-Württemberg Michael Blume told Germany's Protestant EPD news agency.

The president of Munich's Jewish IKM cultural community, Charlotte Knobloch, said the authors of the INSM campaign were "completely out of line and should make sure that they do not stir up prejudices with such representations."

Protestant theologian Christoph Markschies told the Catholic KNA news agency the INSM ad was a "dreadful prime example" of anti-Jewish prejudice that was typically the subject at two-hour lessons in schools and universities.

Judaism was "once again [being] portrayed as a religion of laws full of absurd prohibitions," exclaimed Markschies.

Habeck: "Campaign of our lives"

Opening the Greens' congress in Berlin, linked by video nationwide, co-leader Robert Habeck said his party was "facing the election campaign of our lives."

Everyone in Germany was "watching" the Greens, declared Habeck, referring to their polling federally at about 22% — behind outgoing Chancellor Angela Merkel's CDU-CSU conservatives at 28%.

Habeck urged his party to seek necessary far-reaching transformations in such a way that people would not be overwhelmed, adding, however, the task was to implement UN-led climate policy "about twice as fast" as in the past.

"Change is only possible with the majority of people in Germany," he said, while conceding that recent Greens' campaign "mistakes" had dented ratings after making a "furious start" with Baerbock's emergence as Greens chancellery candidate in April.

Freedom, said Habeck, who holds a doctorate in philosophy and was previously environment minister in the northern Schleswig-Holstein state, did not mean a lack of rules, but how in the future "we adjust the rules of society in such a way that a free life, a free society is optimally possible."

Policy resolutions to be finalized at the congress by Sunday include a higher carbon dioxide (CO2) charge of €60 ($73 per ton) within fuel pricing but offset by a state energy refund per individual, billed by the Greens as benefiting poorer persons.

Another draft seeks a higher consumer tax on animal foodstuffs. Delegates Friday rejected a speed limit of 70 kilometers per hour (43mph) on county roads, but backed party leaders in seeking a 130-kilometers-per-hour limit on autobahns.

Ahead of Germany's 2013 federal election, the Bild tabloid accused the Greens, notably their then-parliamentary group leader Renate Kunast, of wanting to introduce a Veggie Day in "all public canteens," without meat.

Already in Stuttgart, employees had become mutinous against "Veggie Day," asserted Bild in August 2013, "simply not wanting to be told to renounce eating meat."