Germany Marks Five Years of Women in Armed Forces | Germany | News and in-depth reporting from Berlin and beyond | DW | 02.01.2006

The German armed forces, the Bundeswehr, first allowed female soldiers to join its ranks five years ago. Today, it's not unusual to see women in uniform serving in the Bundeswehr's missions abroad. 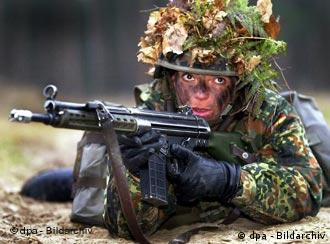 Fighting alongside the men

Though their numbers still aren't many, at least the 11,800 women in uniform today are no longer stared at like some rare species in a zoo. For the pioneer women soldiers who joined the Bundeswehr in 2001, it was a different story.

"The first thing I heard was men whispering and saying, 'What's she doing here, she must have taken a wrong turn.' And I just said, 'No, I belong here, and I'm doing the training together with all of you'," one female recruit remembered of her introduction to military life.

The Bundeswehr didn't voluntarily open its doors to women. It took a case brought before the European Court of Justice in 2000 by Tanja Kreil. A trained electrician, Kreil felt discriminated against when her application to the Bundeswehr was rejected not because of her qualifications, but because of her gender. On Jan. 11, 2000, the judges agreed with Kreil -- a decision welcomed by those German women for whom the dream of joining the army had become a real possibility. 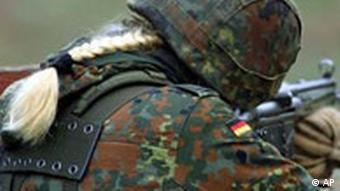 The Bundeswehr has been open to women since 2001

"It's just the whole environment, the camaraderie, the physicality and the whole training," said one of Germany's first female soldiers, who declined to be named. "It always fascinated me, even as a small child, and it was always a dream of mine to join the army."

Following the ruling, the German government had to change the country's Basic Law, which, in Article 12, expressly forbad women from armed service.

Breaking up the boys' club

During the first two decades of its existence, the Bundeswehr, which was established in 1955, was exclusively a boys' club. Starting in 1975, women were permitted to serve only in medical units or musical bands.

But after winning the right to serve in fighting units alongside men, 244 women joined the Bundeswehr in January 2001 -- on a voluntary basis. Compulsory military service for women is still prohibited by law.

Five years ago, a new era of change began for the Bundeswehr, from logistical adjustments such as separate barracks and facilities for women, to behavioral adjustments in the way male training officers deal with their female charges.

Female soldiers generally agree that they don't want any special treatment, but especially in the beginning, cases of sexual harassment by male training officers or male recruits did crop up. Bundeswehr officials made sure that offenders were strictly punished, and ran special seminars for officers on preventing sexual harassment.

Today, women make up 6 percent of Bundeswehr soldiers. It will probably take another five years before a woman can become a company commander, and another 15 years before an entire battalion will be commanded by a woman. German army officials recognize that they've not yet exhausted the kind of contributions women can make to the Bundeswehr. Serving as an example of that are the 300 women currently taking part in foreign missions -- something that was considered unthinkable only a few short years ago.

50 Years of the Bundeswehr

The German Army, or Bundeswehr, has gone through many changes and has faced many diverse challenges since its formation in 1955. Read DW-WORLD's dossier of stories.

Opinion: The Germans and Their Army

When the Bundeswehr marked its 50th anniversary with a military tattoo, few Germans seemed to care. Those who did were more apt to protest -- a sign of a continued uneasy relationship, says DW's Nina Werkhäuser. (Nov. 10, 2005)

Germany's army turns 50 on Saturday. It was originally formed to facilitate war-torn Germany's integration into the West. Today, the Bundeswehr maintains the peace in hot spots around the world. (Nov. 12, 2005)