Germany Tuesday marks the 55th anniversary of the June 17, 1953 uprising in East Germany when thousands of workers took to the streets against the Communist government, an event that set the stage for the 1989 protests. 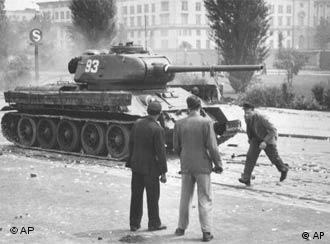 As Germany marks the 55th anniversary of the rebellion on Tuesday, June 17 with a series of remembrance events, the head of Germany's Social Democratic Party, Kurt Beck, warned on Monday of seeing the Communist dictatorship in East Germany through rose-colored glasses.

More than ever before, it is important today to remember the regime's injustices and the widespread suffering it caused, Beck said, adding that the East German government did not know the meaning of freedom, equality or independent labor unions.

Referring to the uprising's victims, Beck said, "Their courage and their determination is a warning for us to fight for democracy."

The East German uprising began as a series of strikes and protests at living standards; it soon turned political, with town halls being stormed amid vocal demands for German reunification.

The immediate trigger for the unrest was an announcement by the Communist government that it would increase working hours for factory employees while simultaneously drastically raising the price of groceries.

The backdrop to the uprising was a policy of "expanding socialism according to plan" by East Germany's communists in the early 1950s. It involved a combination of expropriating farms to create massive industrial-scale farming collectives and stepping up construction of the heavy-industry sector. That combined with crushing World War II reparations payments plunged the East German economy into chaos.

As austerity measures became the order of the day, the country fell into economic crisis as more and more people left for the relative prosperity of West Germany. By the spring of 1953, close to 30,000 people left East Germany every month.

Then came the strikes. During the last days of May and early June, dissatisfied workers began laying down their tools. But the first massive wave of protest came on June 16, as thousands of construction workers, emboldened by the death of Stalin, protested on Berlin's Stalinallee (today's Karl Marx Allee) against wage cuts, forming a long protest march through East Berlin. 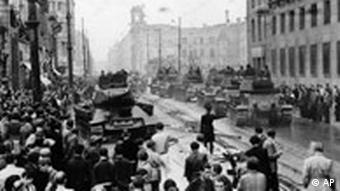 The following day, more than a million people went on strike and took to the streets in more than 700 cities and communities. What began as an uprising for better wages quickly turned into a protest for freedom, democracy and unity in Germany. The workers called for greater government transparency, a better quality of life, the resignation of the GDR's government, free elections by secret ballot and reunification.

The tense situation escalated further in East Berlin, the epicenter of the unrest. The GDR regime turned to the Soviet Union for help. Soviet tanks rolled into the unarmed crowd of protesters. The troops began firing at the workers on Friedrichstrasse and at Potsdamer Platz, killing dozens of people.

Seen today, the dramatic images of defenseless protesters standing off against massive tanks evoke images of the democracy protests at China's Tiananmen Square, which would follow years later.

During the days following June 17, as many as 10,000 protesters and members of the strike committee were arrested. More than 1,500 protesters were given lengthy prison sentences.

Despite the crackdown, the revolt quietly simmered in East Germany for decades to come until the peaceful protests of 1989. That time around the Soviet tanks stayed off the streets and within a year the Berlin Wall fell and East and West Germany were reunited.

For many years, the 1953 uprising was ignored by East Germany. In the West, it was a public holiday but largely forgotten by ordinary people. 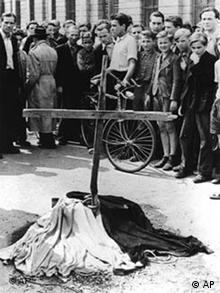 An unknown number of people were killed in the uprising

That has changed in recent years with many German towns renaming streets after people involved in the uprising, museums organizing special exhibitions on the topic and the publication of a spate of books about the events.

Five years ago, then German president Johannes Rau told a special session of parliament in Berlin on the 50th anniversary of the uprising that the event was a watershed in European history.

"It was a revolt that was courageous, spontaneous and supported by all classes of people is one of the major landmarks of the history of German and European freedom," he said.