A German computer industry body has ruled that swastikas and Hitler's mustache can be depicted in the World War II game Wolfenstein. The group had previously judged that images should be doctored to remove Nazi symbols. 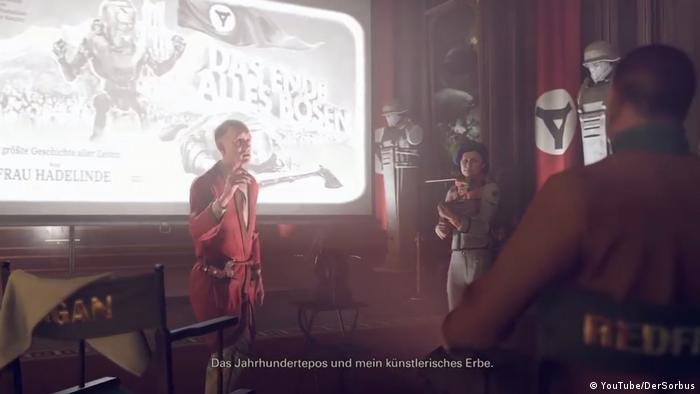 A computer game that was barred from showing swastikas and other Nazi iconography in Germany should be allowed to do so, an industry body has ruled.

The German Entertainment Software Self Regulation Body (USK) decided that games should be examined on a case-by-case basis, rather than being subject to a blanket ban.

The USK, which is tasked with regulating age ratings and game content, had previously deemed that the game broke German law by depicting "anti-constitutional" symbols such as the swastika.

Although German law allows the depiction of Nazi-themed films and other "art or science, research or teaching," the rules around computer games are a gray area.

Wolfenstein is a series of computer games that originated in the early 1980s in which players battle against Nazi German forces in an alternative universe.

In the German version of the newest edition of the game, Wolfenstein II: The New Colossus, images of Adolf Hitler were changed to remove his mustache and the swastika was replaced with an alternative symbol in the Nazi flag.

The USK, which was given responsibility for policing content by Germany's youth protection services, also said that games themed on the Nazi era would be subject to an age limit.

Read more: The silence of the swastikas at the Theater Konstanz

"Through the change in the interpretation of the law, games that critically look at current affairs can, for the first time, be given an age rating by the USK," said USK managing director Elisabeth Secker.

"This has long been the case for films and with regards to the freedom of the arts, this is now rightly also the case with computer and video games," she said.

From now on, USK judges will decide if content has "an artistic or scientific purpose, or helps to depict current or historical events."

The alterations to the game had sparked uproar in the gaming community, which said games should be treated like films.

A theater is under investigation for promising free entry to spectators who wear a swastika to a play named after Adolf Hitler's "Mein Kampf." The theater has defended the move as a social experiment. (18.04.2018)

A German man took his case to the court after being convicted for posting a picture of Heinrich Himmler. But the court argued that German authorities had not undermined freedom of expression given the country's history. (05.04.2018)