The silence of the swastikas at the Theater Konstanz | Culture | Arts, music and lifestyle reporting from Germany | DW | 21.04.2018

The silence of the swastikas at the Theater Konstanz

Offering free tickets to anyone wearing a swastika during a production of George Tabori's "Mein Kampf" the Theater Konstanz has drawn global attention. Is there more than clever marketing behind the deal? It took all of 30 seconds for the first member of the audience to storm out of the theater. Visibly disgusted by a menacing prologue vividly portraying acts of neo-Nazi violence, she and about half a dozen others decided to leave the packed theater during the course of the controversial premiere evening. Clearly they didn't agree with the way that this divisive production of George Tabori's "Mein Kampf" at the Theater Konstanz dealt with extremism, alternating between humor, aggression and absurdity.

Introducing lookalike characters from the present, such as US President Donald Trump and British Prime Minister Theresa May into the narrative which focuses on a young Adolf Hitler in Vienna, the play challenged preconceived notions of what may qualify as fascism — and where it may start. It also questioned what sort of sinister motivations could be the driving forces behind populist leaders today. At the same time, it came across as two hours of mixed metaphors hurled at the audience as an exercise in sensory overload.

But it wasn't just the writing, the direction or the dramaturgy that ruffled some feathers in the course of the evening. The play was aimed at provoking audiences even before they arrived at the theater. Promising to give a free ticket to anyone donning a swastika armband, the show says it hoped to connect each audience member with their inner dictator. 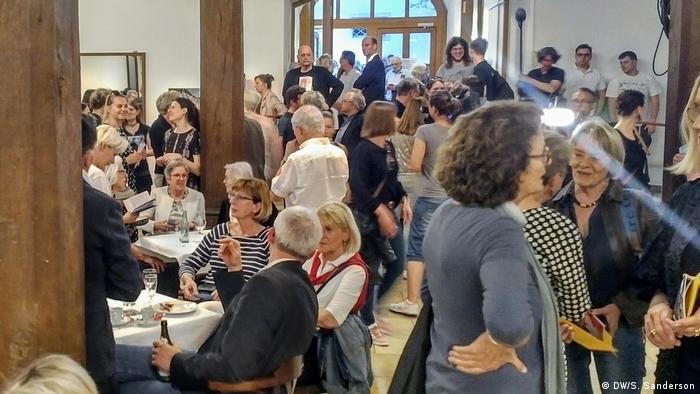 The premiere at the Konstanz Theater was completely sold out

Searching for a symbol of hate

Associated with the brutal annihilation of the vast majority of Europe's Jews as well as other minorities during World War II, the universally recognized symbol of hate is actually banned in Germany — except for artistic purposes and educational applications. A court decided recently that within the theater's premises the swastika would also be tolerated for this particular production of Tabori's "Mein Kampf" — despite much protest among Jewish groups.

But the swastika offer quickly turned into a publicity campaign that saw news organizations from Germany and indeed around the world descend on the picturesque town of Konstanz.

Some people feared a strong showing of right-wing extremists coming to Konstanz — either to prove a point about their convictions or to protest the use of swastikas as a marketing gimmick. Others worried that especially young people would just want a free ticket to the theater, unable to fully grasp the magnitude of death and destruction for which the symbol stood. The whole town of Konstanz was waiting with baited breath to see how the opening night would actually pan out.

But in the end it was a case of much ado about nothing. Across the stalls and dress circle, not a single person could be seen wearing a swastika. Audience members were stretching their necks before the show to see even just a single such red, white and black armband.

And despite heightened security and police officers on site to react to any sort of aggression, the only neo-Nazis represented anywhere were those on stage. 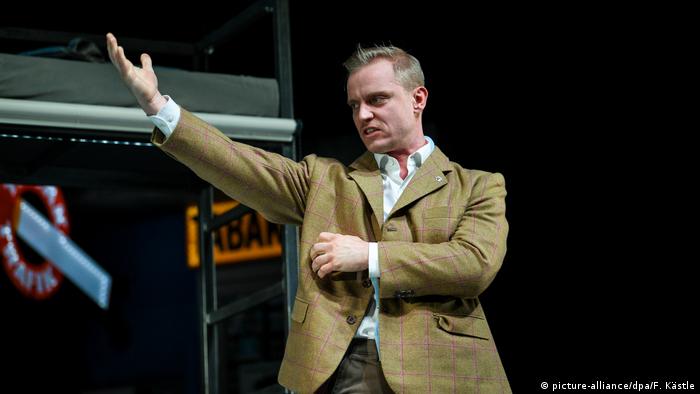 The theater had announced that it would also offer Star of David stickers to wear along with a ticket purchase - presumably for those wishing to express their solidarity with Jews. No one apparently opted to commit to that option either, despite the recent spike in anti-Semitism throughout Europe.

Was the premiere night, which took place on Adolf Hitler's birthday, April 20, perhaps simply too ominous a date for theatergoers to dare to cross over to the dark side — or did the controversy regarding the show's marketing in recent days simply push the management of the theater to take a different direction? 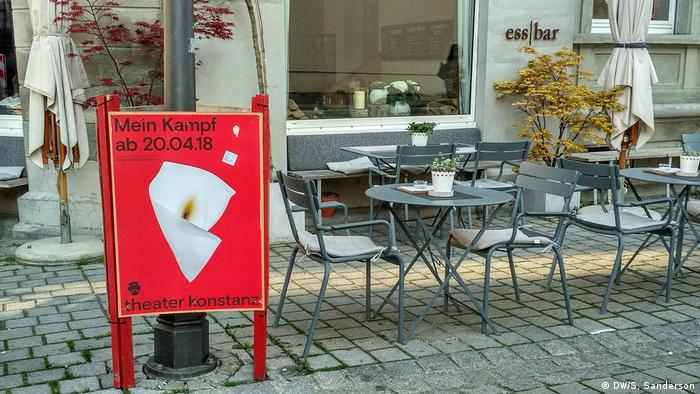 In the end, as the play reached its climax in a high-tech crucifixion scene featuring actors dressed as members of the Ku Klux Klan as onlookers, both swastikas and Stars of David came raining down from the ceiling as politically charged confetti. This allowed every audience member to be part of the action without having to take active responsibility for it.

That seems to be an ongoing theme in this divisive production of George Tabori's "Mein Kampf:" the ownership of responsibility is constantly passed on and deferred. There are no swastikas to be seen in the audience unless the audience can shirk off the responsibility that comes with proactively deciding to wear such universally offensive gear, whatever the incentive. 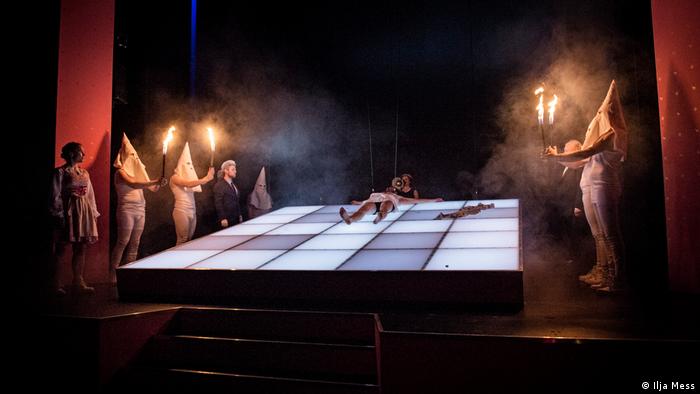 Metaphor overload: the KKK watches on as a Jewish bookseller is crucified on a disco swastika at the end of "Mein Kampf"

Nor is there any semblance of responsibility in Serdar Somuncu's direction, whose various attempts to draw theatergoers into the themes of the play simply come across as marketing ploys and simple solutions for keeping the audience's attention span going.

Though in many ways the production turned out to be a visual feast with great art direction and outstanding acting with many entertaining high notes, the anti-populist message of the production of "Mein Kampf" at the Theater Konstanz seemed to fade into the background amid the cacophony created by the controversy surrounding the publicity of the play.

City of Konstanz: History along the shore

An enchanting lake and a long history - this combination draws tourists, students and everyone else year after year to Konstanz. Life is pleasant there, except if you're perhaps a town planner. (14.03.2012)