Germany leads the charge in low-energy homes | Environment | All topics from climate change to conservation | DW | 03.02.2011

EU backing for zero-energy buildings has given the German construction industry a boost. As materials become less expensive, the passive house, a German invention, is likely to become a more common sight. 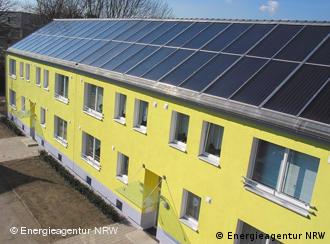 Big heating bills may become a thing of the past

The German government wants to reduce the energy demand for heating by 20 percent by 2020. From that year on, all new buildings will be required to be Nearly Zero Energy Buildings, which means they use less than 15 kilowatt hours of heating per square meter per year. The average house being built today uses 4 times that amount.

"Of course there are going to be increasing numbers of passive houses," said Angela Espenberger of the International Passive House Association in an interview with Deutsche Welle.

She said passive houses are being developed all over the world, including countries where the materials and labor weren’t previously available.

"Companies are finally realizing that there is a real need for products that are passive house suitable. So we have more and more certified products, such as insulation and ventilation systems, that are compatible with passive houses," Espenberger said.

She believes this boom is going to drive new developments, which will make the technology needed for the construction of passive houses more commercially competitive.

"It's going to force people to develop more products, which is of course going to influence the economic side of passive houses, making them a lot more affordable."

At the moment, a passive house costs up to 8 percent more to build than a conventional house.

Karsten Voss, a professor of building physics at the University of Wuppertal, said zero-energy houses will be more commercially attractive, if people change their mindset and start factoring in the long term savings on energy.

"The technology of today can reduce energy needs by 80 percent, compared to the average building. This also means it's reducing CO2 emissions," he said.

Considering that buildings account for about 8 percent of greenhouse gas emissions, the passive housing movement could help shrink the housing sector’s carbon footprint. 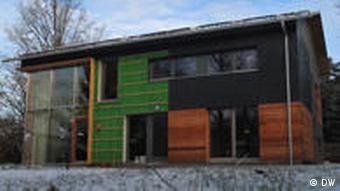 Even in the winter, this passive house stays warm

The zero-energy housing boom has seen the development of innovations like high-tech vacuum insulation that is only 2 centimeters thick. This product is still at the prototype stage, but it may one day replace traditional insulation, which is about 30 centimeters thick.

Energy efficient windows, which are less expensive to maintain and replace, are also being developed. If the costs can be kept low, these may eventually become more commercially attractive than conventional windows.

Voss sees Germany as a market leader in low-energy housing. "In the last 20 years, Germany has come to the poll position in that sector, so ‘Made in Germany’ is a very good label for energy efficiency in buildings," he said.

But Voss said that more needs to be done to improve the skills of construction workers.

"I think we still are in the situation where we have to better educate the contractors in energy efficient buildings, because it's still a small sector," he said.

Oliver Jirka is an architect in Berlin who specializes in energy efficient buildings. His own home is a passive house, which he says is cheaper, quieter and more comfortable than a conventional house. 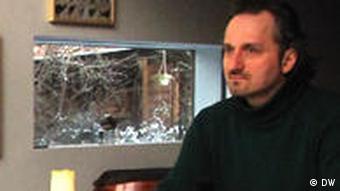 Germany is becoming a center for energy efficiency experts like Jirka

On a chilly winter's day in Berlin, with temperatures pushing minus 10 degrees Celsius (14 degrees Fahrenheit), Oliver Jirka's house stays at a comfortable 20 degrees Celsius. But the house doesn’t use radiators. This cozy temperature is maintained by the walls of Jirka's house, which are padded with 40 centimeters of newspaper. The windows are triple glazed and filled with argon gas, which helps limit heat loss.

As light spills through the tall windows, the argon inside them absorbs the sun's radiation and stops heat from escaping. This is great in the winter and for those hot summer days, Jirka has planted trees to shade the house and stop it from overheating.

The thick walls and triple glazing also make Jirka's house extraordinarily sound proof. In the past, sealed solar-heated homes often had stagnant air and were susceptible to mold. But Jirka’s home has a built-in ventilation system. This means that the building remains airtight, so none of the heat is lost, but it still gets a good supply of fresh air.

"The fresh air passes a filter and we have very clean air. You have more fresh air than by window ventilation," Jirka said.

The filters keep out dust, pollen and other particles, which would otherwise come into the house if the windows were left open for ventilation.

A heat exchanger under the house draws in fresh air from outside. In the summer, warm air is cooled because the ground is colder than the outside atmosphere. In the winter, when the ground is warmer than the air temperature, drawing the air down and over the ground heats it up.

Zero-energy housing developers are now looking for ways to install technology, which will allow more homes like Jirka's to produce energy. Jirka's house does this with solar panels on the roof, which allow him to neutralize his energy consumption.

Buildings in the German city of Dusseldorf prove the sky is the limit when it comes to enriching the urban environment. Trading tiles for vegetation, green roofs promise both environmental and economic benefits. (26.04.2010)

Cooling buildings with the power of the sun

Sunlight can be used not just to warm homes but also to cool them and keep food fresh. Advanced and sustainable technologies for solar cooling already exist. But they’re still too expensive to be used on a global scale. (26.05.2010)

Five years ago it would have been difficult to find low-energy houses in Poland. But in response to high heating bills and a recent EU directive on low-energy home building, they are becoming increasingly common. (05.04.2010)