Cooling buildings with the power of the sun

Sunlight can be used not just to warm homes but also to cool them and keep food fresh. Advanced and sustainable technologies for solar cooling already exist. But they’re still too expensive to be used on a global scale. 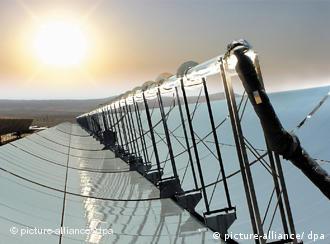 “Cooled using sunlight” – it may not be that unusual to find that label on food packaging in the future. Researchers are hoping to use the sun's rays to keep fruits, vegetables and other perishable goods fresh for longer periods, particularly in developing nations where refrigerators are often a luxury and only densely populated regions are connected to the electricity grid. 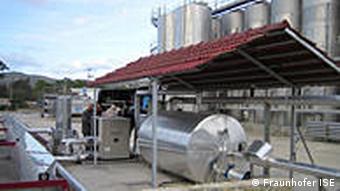 Wine is cooled in tanks in Tunesia. The collectors, left, absorb sunlight

Solar cooling technologies are the focus at the Fraunhofer Institut for Solar Energy Systems (ISE) in Germany. Scientists there have proven that they work. In a project called “Medisco” funded by the European Union, they installed a solar power plant to cool wine and milk at a winery in Tunisia and a dairy in Morocco.

“The method can work well in sun-rich countries, particularly in remote areas where there's a lack of conventional cooling possibilities on account of water scarcity and unreliable energy sources,” ISE researcher Toman Nunez said. “It's environmentally-friendly. Besides, expensive energy use for conventionally-powered cooling appliances are reduced to a minimum.”

The researchers have set up solar collectors which focus the sunlight with mirrors on to an absorber. The concentrated solar radiation then heats water in a container up to 200 degrees Celsius. The extremely high water temperature is needed to power so-called “absorption cold machines” at high outside temperatures.

“Unlike regular refrigerators, we don't use any electricity to generate cold but rather to generate heat,” Nunez said. But the results are the same in both cases.

“Cold in the form of cold water or – in our case – a water-glycol mixture.”

Not ready for the market

Even rooms and entire buildings are being ventilated with solar-powered cooling systems or solar air conditioning. Several successful research projects have shown that they use between 50 and 80 percent less energy than conventional cooling technologies.

Despite the obvious advantages, experts point out that the technology isn't ready for the market yet.

“The costs for the installation of complex systems are simply too high,” Ursula Eicker from the College for Technology in Stuttgart said.

Cooling a single home with solar energy in Germany or in Austria costs between 30,000 and 40,000 euros – twice as much as a conventional air conditioner. A mid-sized company in Africa can hardly afford to pay such a high price, especially for expensive and large industrial complexes that are hoped to drive Africa's growth.

But researcher Nunez said that solar-powered cooling systems still have a future in the mid-term since the technology has been tested and there's a demand for it. That's especially true for cooling and ventilating buildings in sun-rich Africa, he said.

“It's important that we gradually build up distribution step by step,” Nunez said, adding that getting people involved in the process was crucial. “A part of the production should take place locally and you need trained engineers for the installation.”

At first, solar-powered cooling systems can be introduced in state-funded projects to create awareness about the technology. And such campaigns can at the same time drum up support for energy-efficient construction practices, Nunez said. “First optimize the buildings, then the energy systems – that goes hand in hand.”

Eicker said that solar cooling systems could never be competitive without state subsidies as in Germany, Spain and Austria.

“We are in an absolute niche,” she said. In 2007, just 81 large solar-powered cooling systems were installed worldwide – almost all of them in Europe and most in office buildings.

To make the technology work, governments need to take an interest and back them with state funds. That's already happened in Morocco and Egypt. 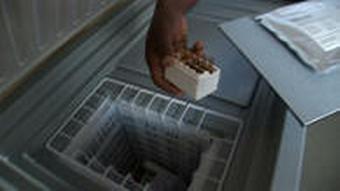 There's another reason for replacing conventional cooling systems – cooling agents and fuels used to power refrigerators often contain substances such as chlorofluorocarbons in their insulation foam or their refrigerant cycle. These are believed to be 12,000 times more harmful for the environment than carbon dioxide. They are also believed to destroy the ozone layer.

The initiative is based on the 1987 Montreal Protocol in which 180 countries have committed themselves to replace so-called ozone killers.

As part of the program, the German government has set up a project called “Proklima” in which it cooperates with 40 countries including small African states such as Swaziland to produce new climate-friendly refrigerators and cool boxes together with local companies. It's estimated that the initiative has already cut 42 million tons of carbon dioxide globally.

Eicker said that replacing old conventional refrigerants or cooling agents would be completed by the end of the year. “Thanks to a law, there's hope. It shows that international cooperation in climate protection can definitely bring about something.”