For the second time in three weeks, a Premier League game has been stopped due to racist behavior. In Chelsea's game against Tottenham, Germany international Antonio Rüdiger was the target of the abuse. 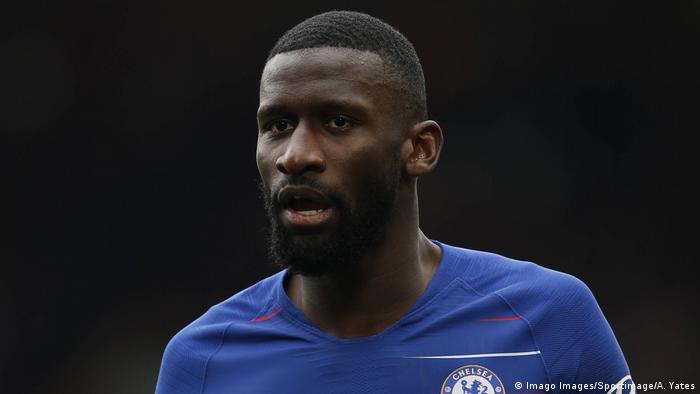 In a Premier League match between Chelsea and Tottenham Hotspur, three stadium announcements were made about reported racist behavior interfering with the game.

It is believed to be the first time the anti-racism protocols have been invoked at a Premier League game.

Just after Son Heung-min had been sent off for a foul on Germany international Antonio Rüdiger, referee Anthony Taylor stopped play because something was thrown at Chelsea's goalkeeper Kepa. Later it became clear that that stoppage had taken place because of alleged racism towards Rüdiger.

The 26-year-old Berliner appeared to claim a supporter had been making a monkey gesture towards him. He informed his captain, Cesar Azpilicueta, who reported this to Taylor, who then told pitchside officials.

Afterwards, Azpilicueta said: "Toni came to me and told me he was listening to racist songs towards him, so I reported it to the referee... We are very concerned and aware of the problems... It's a problem not just in football, but in life."

After pitchside officials were informed, the first announcement was then made in the stadium: "This is an important message: Racist behavior among spectators is interfering with the game. Please remember that in football there is no place for racism."

Along with a stoppage in play, the stadium announcement is the first step in FIFA's three-step protocol for tackling racist abuse. The second step, if the discriminatory behavior continues, is to make another announcement and send the players to the dressing room for a specific amount of time. The third and final step is to abandon the game if the discriminatory behavior has not ceased.

Tottenham issued a statement afterwards that read: "We are now conducting a thorough investigation, which will include liaising with Chelsea and their players for their observations. Any form of racism is completely unacceptable and will not be tolerated in our stadium. We take any such allegations extremely seriously and shall take the strongest possible action against any individual found to be behaving in such a way, including stadium bans."

Chelsea's head coach Frank Lampard gave his support to Rüdiger, while Tottenham head coach Jose Mourinho said: "I saw the referee follow the protocol [regarding racism], and of course our club will deal with it because every club is together on this situation. We are disappointed but the protocols were followed."

Racism in football stadiums has been an issue on the rise in 2019. England's players suffered racist abuse for their EURO 2020 qualifier in Bulgaria, while only last week Hertha Berlin's youth team walked off after racist abuse.