Officials say Adil Yigit, who protested at a joint press conference of German Chancellor Angela Merkel and Turkish President Recep Tayyip Erdogan, will receive a humanitarian visa instead. Yigit says it's a "trap." 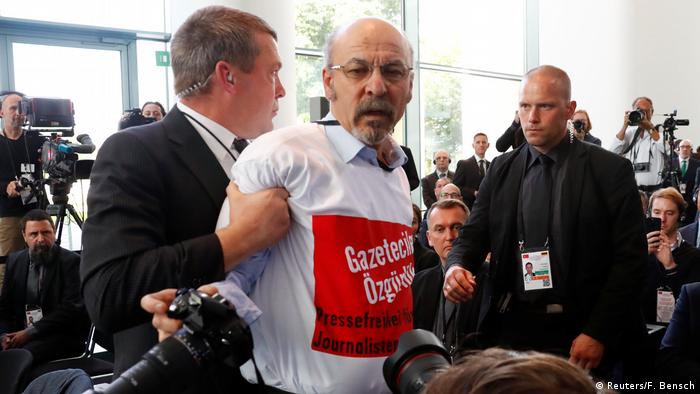 German authorities have said they will not deport a Turkish journalist who protested against President Recep Tayyip Erdogan during a joint press conference with Chancellor Angela Merkel last month.

Adil Yigit said on Sunday that the immigration office in the northern city of Hamburg had told him he would be deported if he did not leave Germany by January.

Yigit, who said he faced persecution in Turkey, claimed the deportation order was linked to his protest at the press conference. The 60-year-old told DW that Germany "probably wanted to serve" him to Turkish President Recep Tayyip Erdogan amid a backlash by Turkish media following the press conference.

'No plans to deport him'

But a spokesperson for the Hamburg immigration office in an interview with public broadcaster ARD denied any intention of deporting Yigit. "There are no plans to deport him," Florian Käckenmester said.

Käckenmester told the epd news agency that Yigit had been informed that his temporary residence permit would not be renewed because he no longer fulfilled the requirements. But Yigit was also told that officials would suspend an automatic deportation linked to the decision and offer him a new residency permit based on humanitarian grounds.

Security guards escorted Yigit out of the joint press conference with Merkel and Erdogan in September after he wore a T-shirt with "freedom for journalists in Turkey" emblazoned on the front.

He told DW he had planned the protest after seeing reports that Erdogan would cancel the joint press conference if Can Dundar, a prominent Turkish journalist living in exile in Germany, was allowed to attend.

"I just couldn't believe it," he said. "This blackmail was going on right in the heart of Germany."

Turkey has imprisoned hundreds of journalists since a 2016 coup attempt against Erdogan. Dundar, who was arrested briefly in 2015, fled Turkey one month before the coup attempt.

Yigit runs the Turkish-language news website Avrupa Postasi, and has lived in Germany for 36 years. Despite being eligible for German citizenship, he told DW he wanted to remain a Turkish citizen for political reasons.

"I figured that, as a Turkish citizen, I could set something in motion in Turkey," he said.