Germany, France and Britain call for Afghanistan conference | Europe| News and current affairs from around the continent | DW | 07.09.2009

Gordon Brown and Angela Merkel bow to domestic pressure and step up their plans to pull out of Afghanistan. 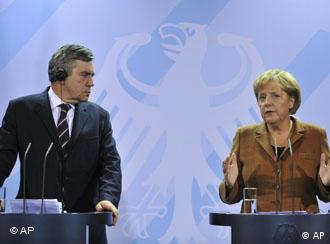 Looking for an Afghan exit strategy?

In a bid to push Afghans to take more responsibility for their own country, Britain, France and Germany unveiled a proposal for an international conference. But a venue for the meeting has yet to be chosen.

In the wake of the second presidential election in Afghanistan, Germany's Chancellor Merkel said she would like to create some momentum in that country. "Now we are coming to a transitional phase," she said.

"What is important, and this is our joint view, is to apply pressure in order to find a way to get the Afghans to appreciate that they have to take responsibility step by step," the chancellor told a joint press conference with British Prime Minster Gordon Brown.

Merkel and Brown said that they were launching the initiative with French President Nicolas Sarkozy and that they had consulted with the United States as well as NATO. 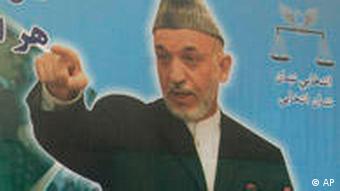 Karzai closing in on second term

"Our plan is to prepare the Afghan government, over the coming transition period, to take on an increasing number of responsibilities itself," Merkel said at the press conference.

Prime Minister Brown added that the main topics of the meeting would first and foremost be how the Afghans could play a bigger role in running their own country. Other topics would be security and training for the Afghan armed forces and the police, development and governance.

"It is right in my view, eight years since September 11, and after many achievements in Afghanistan ... that we look at how we can get the Afghans themselves more involved in taking responsibililty for their own affairs," said Brown.

The overall goal for the conference will be to prepare Afghanistan for the day when the international troop presence can start to be reduced.

When questioned by reporters, Merkel would not give a time frame for beginning troop reductions. She said that those decisions should be made in concert with their allies.

Signs of an exit strategy?

The Afghan mission is becoming increasingly unpopular in many of the 42 countries that are involved in providing troops for the 100,000 member international force, 65,000 of which make up the NATO led International Security Assistance Force (ISAF).

The announcement of the upcoming conference comes on the heels of a particularly bad week in Afghanistan, where a NATO airstrike last week killed over a hundred people.

An unspoken subtext to the announcement was the idea that this conference could be interpreted as the West starting to formulate some sort of exit strategy from Afghanistan. 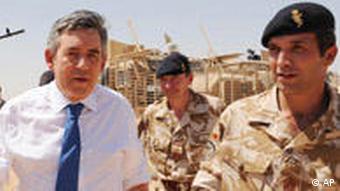 As officials continue to count the votes from last month's election, partial results show that incumbent President Hamid Karzai is ahead and moving towards a first-round victory.

However, there have been allegations of massive electoral fraud. On Sunday, Afghan electoral authorities announced the first cancellation of votes from last month's elections.

Election officials have cancelled the votes from more than 400 polling sites across the country, accounting for up to 200,000 votes, due to fraud, said a spokesman for the Independent Election Commission.

Even so, Karzai has held onto a lead, with 48.6 percent of the vote, according to the latest results. He is well ahead of his nearest rival, former foreign minister Abdullah Abdullah, who has so far garnered 31.7 percent of the vote.

President Karzai is still short of the 50-percent-plus-one-vote that he needs to win an outright victory and avoid a runoff, which many observers have said could be problematic if turnout proves lower a second time around.

Abdullah has alleged widespread vote-rigging by Karzai's camp and has threatened to reject any result he regards as compromised. On Saturday he warned that "state-engineered vote" fraud may fuel more instability.

"We have insecurity in this country. We have bad government. We have corruption. We have narcotics. We have a war. We have an insurgency," Abdullah said to reporters.

He added that evidence of a rigged election would hand another "excuse" to the increasingly deadly insurgency against the Western-backed Afghan authorities.

EU commits troops to Afghanistan, but calls for improvements in Kabul

The European Union has promised that its troops will stay the course in Afghanistan. However, officials called on Afghan politicians to help bring an end to corruption, human right abuses and the narcotics trade. (06.09.2009)

On the final day of informal, two-day talks in Stockholm, EU foreign ministers will reassess their strategy in Afghanistan. Bringing down the number of civilian casualties is a chief concern. (05.09.2009)

Germany and the US both sought to deflect blame for a recent airstrike in Afghanistan aimed at insurgents but which may have killed dozens of civilians. The matter could open a rift between the NATO allies. (06.09.2009)