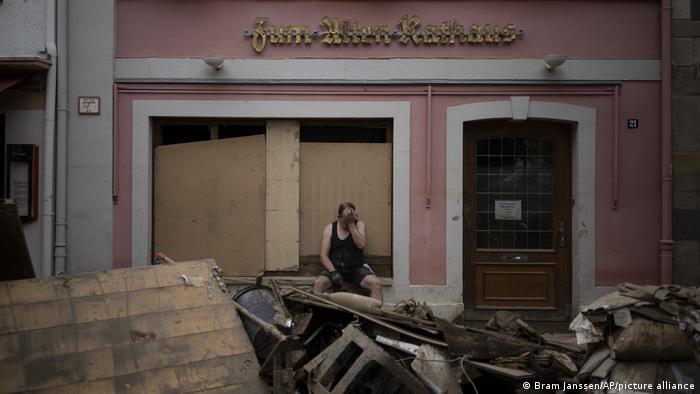 Volunteers helping the clean up after the floods in Germany have been "pelted with garbage" during their work, the Federal Relief Agency (THW) revealed on Saturday.

Some 4,000 THW volunteers have been working tirelessly in the flooded parts of the country for the last week.

But at times, the aid workers have been met with a hostile reception, vice president of the THW, Sabine Lackner, said.

"Our helpers are being insulted," Lackner told German broadcaster RTL on Saturday. "When they are on the road with the emergency vehicles, they are being pelted with garbage," she added.

Behind the attacks, she said, are members of the Querdenker (Lateral Thinker) group, which has staged numerous anti-lockdown protests and spread conspiracy theories about the pandemic. Lackner also cited the doomsday Prepper network.

The aggressors pretend to be affected by the recent disaster, in order to carry out their disruptions, Lackner said.

No operations have yet been canceled because of the incidents, but the situation was a psychological stressor for the volunteers.

"I'm immensely grateful to our volunteers that they have continued," Lackner said.

According to the THW, roughly 30,000 people are still without electricity or drinking water in the wake of last week's heavy rain which caused several rivers to burst their banks, flooding entire towns and villages.

The death toll currently stands at 180, while roughly 150 others are still missing.