Germany discloses data on farm subsidies to avoid EU penalty | Germany | News and in-depth reporting from Berlin and beyond | DW | 16.06.2009

Germany has become the last EU country to disclose the beneficiaries of the bloc's generous farm subsidies. But the state of Bavaria is still resisting financial transparency. 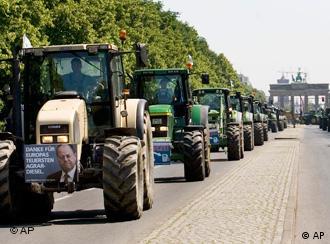 The German Agricultural Ministry on Tuesday posted a list on the Internet disclosing the names of German recipients of 5.4 billion euros (7.5 billion US dollars) in annual agricultural subsidies granted by the EU.

Germany is the last country in the 27 nation EU to publish the names of beneficiaries of farm aid.

Meanwhile, it has emerged that some recipients in Germany are not farmers in the traditional sense, but millionaires, big corporations, or even organizations that have no links to agriculture.

Reinhild Benning, an activist with the German environmental group BUND, has taken a closer look at how the EU farm aid has been spent in Germany.

She has found out that the German airline, Lufthansa, has been receiving subsidies for dairy products it serves its passengers on transcontinental flights.

"Under EU rules this constitutes an export for which the airline absurdly receives export subsidies to the tune of two-and-a-half-million euros," she said.

Another example of questionable EU subsidies, she said, were 500,000 euros in annual subsidies received by the German energy giant RWE for measures aimed at recultivating coalmining areas in eastern Germany.

The German dairy company Muellermilch, she added, was able to milk the EU cash cow for a new creamery it built in the eastern German state of Saxony.

"While building the new plant, Muellermilch closed two of its older ones in western Germany", she said.

"On balance, the EU spent 70 million euros to enable the company to scrap 17 jobs."

She believes that farmers "will not be amused" at seeing their names and income made public.

"In the villages everyone will know immediately who receives how much in subsidies. That is why I insisted on making transparent for what purposes the money is being granted," she said.

The obligation to make the payments transparent dates from a bitterly contested reform of the EU’s Common Agricultural Policy (CAP) in 2006.

At the time, notably Britain demanded greater accountability with regard to farm subsidies which eat up some 40 percent of the EU’s annual budget.

However, critics say the publication of names and amounts is a violation of privacy rules.

"I would have preferred a solution in which the names of major recipients only are disclosed", said Peter Schaar, the German Commissioner for Data Protection.

In his view, it would have been better to determine a limit for subsidies above which recipients would be obliged to disclose full details.

Farmers in the German state of Bavaria will be spared public scrutiny of their incomes for the time being.

They have a strong lobby in the regional government in Munich.

The Bavarian Agricultural Ministry said it would withhold data on Bavarian farmers until the European Court has ruled on the legality of the move.

But on Tuesday, Michael Mann, a spokesmann for Agricultural Commissioner Mariann Fischer Boel, told the German dpa newsagency that the EU would not hesitate to impose a hefty fine if Germany failed to disclose all its farm subsidy data.

After marathon negotiations, the EU's agricultural ministers hammered out a series of reforms to Europe's expensive policy of agricultural subsidies. (20.11.2008)

Over 40 percent of the EU's budget goes to agricultural subsidies. Are they partly responsible for the current food crisis? The EU says no, but experts say subsidies can imbalance the market over the long-term. (28.04.2008)

In an attempt to jump-start global trade talks, the European Union said it was prepared to end its agricultural export subsidies. But the move has infuriated France, the largest beneficiary of EU farm aid. (11.05.2004)