After 15 years of dithering, Germany and Denmark have finally approved plans to build a bridge across the Fehmarn Strait in the Baltic Sea. 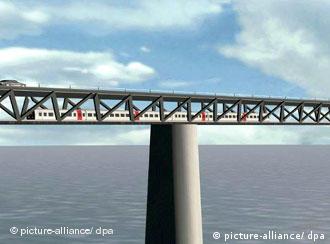 After 15 years, the bridge has been given a green light

The decision was reached in Berlin Friday at a meeting between Germany's Social Democrat Transport Minister Wolfgang Tiefensee and his Danish counterpart Flemming Hansen.

"This bridge joining nations ought not just to significantly reduce driving time between Hamburg and Copenhagen, it's also very important for transport routes in all of Europe," Tiefensee said, adding the bridge should be completed by 2018. Both countries' parliaments must still approve the plan, which requires a treaty, the German transport ministry said.

19 kilometers (11.81 miles) long, the bridge will run from Puttgarden on the Baltic island of Fehmarn and Rødby on the Danish island of Lolland, sparing motorists traveling between the two countries a ferry journey across the Fehmarn Strait and easing the trip from Hamburg to Copenhagen.

It is expected that motorists will be charged a toll fee to use the bridge with the aim of recovering the costs of the project within 25 years.

The bridge is expected to cost some 5.5 billion euros ($7.43 billion). In 2000, a similar link was opened between Copenhagen and
the southern Swedish city of Malmo. 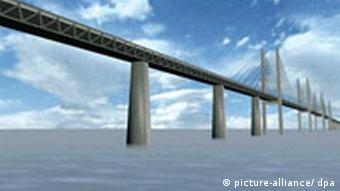 The project has been in the pipeline for some 15 years but has been delayed largely by protracted negotiations over financing.

Although supporters of the project argue that the bridge will be an economic boost to both countries, Denmark announced it would be willing to foot the entire bill after Germany consistently expressed reservations.

Denmark will now be contributing 4.8 billion euros towards the project and would carry out most of the construction, Tiefensee said at Friday's press conference. Germany's part will consist of linking the bridge to its existing transport infrastructure.

Ferry operators in the German states of Schleswig-Holstein and Mecklenburg feared business would suffer, while green groups voiced concerns about the environmental impact.

"We will be looking into every opportunity to stall this project with legal means," said Nabu CEO Leif Miller.

Climbing the Windmills of Schleswig-Holstein

Extreme sports enthusiasts are always looking for the next thrill. When the bungee has been jumped, the sky dived and the white water rafted - what then? If you live in the flatlands of Germany, you climb a windmill. (01.06.2007)

The Danish, Swedish, Norwegian governments and the European Union say a bridge should connect the strait that separates Germany and Denmark near Kiel. But Berlin seems to need convincing. (04.02.2007)