Both the CEO and the chairman of Germany's troubled Commerzbank have announced they will resign, as the company confirms branch and job losses. All eyes are on German financial regulation following the Wirecard collapse. 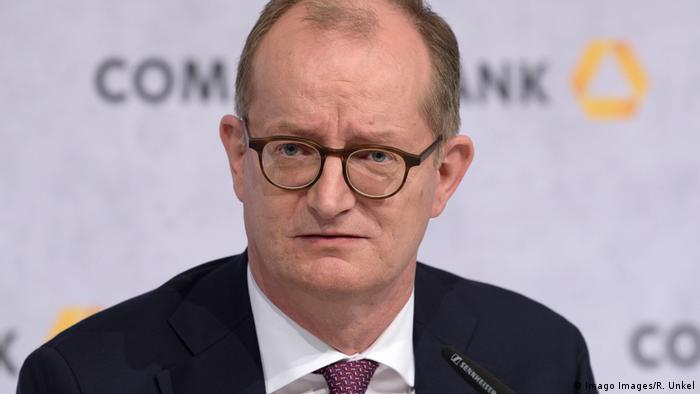 Germany's struggling Commerzbank announced Friday that its chief executive, Martin Zielke, has offered his resignation. The company chairman also confirmed he will step down next month.

In a statement after trading ended, Commerzbank said a recommendation had been made to "mutually terminate" Zielke's appointment as board member and chairman of the board of managing directors by the end of the year at the latest.

The supervisory board will consider his resignation and make a decision during a July 8 meeting.

Meanwhile, Stefan Schmittmann announced he will also resign as chairman of the supervisory board, effective from August 3.

Although Commerzbank has not commented on the reasons for the resignations, the move comes amid discussions of restructuring at the trouble bank.

Earlier this week, German media reported that the bank was considering cutting thousands of jobs and closing hundreds of branches in the coming years as part of cost-saving plans. Zielke has been chief executive since 2016.

Read more: Opinion: When the state gets on board

The German government said they will back Commerzbank and remain loyal to them.

"The federal government stands fully behind its commitment to Commerzbank," the finance ministry said in a statement following news of Zielke's resignation.

"Commerzbank plays an important role in Germany's economy," the statement continued. The German state holds over 15% of Commerzbank's stock, making it the lender's biggest shareholder.

Commerzbank has been involved in several corruption scandals in recent years, including a 2015 case which resulted in a $1.5 billion (€1.33 billion)  payout.

German financial regulators drew criticism in recent weeks following the collapse of tech firm Wirecard, after their chief executive resigned when €1.9 billion could not be located.

Commerzbank had wanted Copernicus, a digital project to be run by its Polish subsidiary, mBank, to be the first Pan-European lender. When it got cold feet last year, mBank's ex-boss decided to go ahead anyway. (11.04.2019)