Julian Reichelt had been accused of leading a workplace culture that "mixed sex, journalism and company cash" at Germany's most-read newspaper. 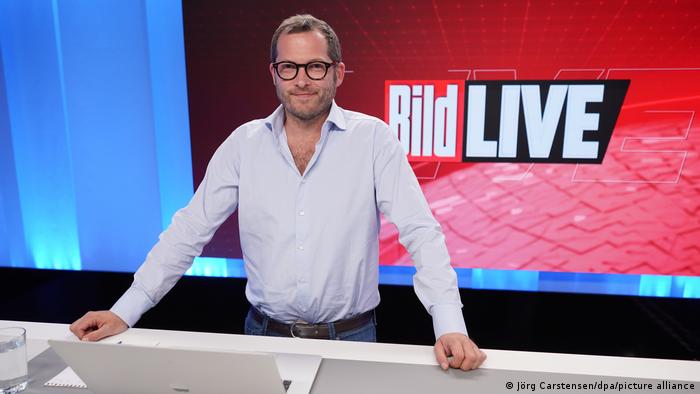 Julian Reichelt is one of the highest-profile journalists in Germany

Germany's publishing giant Axel Springer announced Monday that the chief editor of Bild, the country's top-selling newspaper, Julian Reichelt, has been removed from his post. The decision came a day after an article in the New York Times (NYT) detailed accusations of workplace misconduct under Reichelt's leadership.

The NYT article and Reichelt's subsequent sacking come as Axel Springer has sought to expand internationally in recent years, with its latest high-profile purchase of US-based Politico last month.

In a statement, Axel Springer said Reichelt "did not clearly separate his private and work lives and did not tell the board the truth about it," citing information gained "as a result of press investigations in recent days."

But the publisher also announced legal steps against ''third parties" for releasing confidential business information and private communications, with the aim of trying to harm the company and having Reichelt removed.

Axel Springer did not specify which new allegations had prompted it to sack Reichelt, as the NYT report was based on the company's own investigation about how Reichelt had promoted interns with whom he had had affairs and then sidelined or fired them.

NYT said the evidence it gathered "paint a picture of a workplace culture that mixed sex, journalism and company cash" at Bild, under Reichelt's leadership.

Reichelt had stepped aside while Axel Springer concluded its internal investigation into his conduct, but he was reinstated once the probe concluded that his actions didn't warrant dismissal.

The 41-year-old also sued German magazine Der Spiegel for an expose on what it described "the Reichelt system," in which he allegedly recruited female trainees and interns, sometimes quickly promoted them, but also quickly dismissed them.

NYT reported that Axel Springer also sought to keep details of the investigation's findings out of the German press.

One of the most powerful German journalists

Founded in 1952, Bild has grown to become Germany's top-selling paper, focusing on a mixture of human-interest stories, sports and celebrity news.

Reichelt was the outspoken face of Bild and arguably one of the most powerful journalists in Germany. Recently, he had been at the helm of Bild's new TV venture.

His fall from grace comes as journalists at rival German Ippen media group had been investigating allegations against Reichelt, but were prevented from publishing their findings, NYT reported, prompting concerns for press freedom.

Ippen media group denied having axed the story due to any pressure from Axel Springer executives over the matter, instead, saying it was to "avoid the impression we might want to economically harm a competitor."