There's no steering wheel, no driver and no charge: Self-driving buses will trial in traffic in Berlin until the end of 2019. 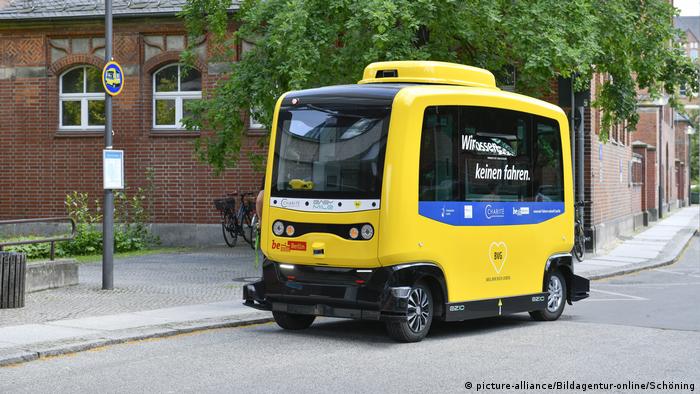 Self-driving buses hit the road in Berlin on Friday, making the German capital the latest city to boast autonomous vehicles on the roads. Germany's first autonomous bus on a public road was launched in the Bavarian town of Bad Birnbach in 2017.

The six-seater buses are powered by electricity and will trial in the northwest of the German capital until the end of 2019. Passengers will not have to pay to use the service.

"We believe that self-driving small buses are a clever addition to our big yellow buses, for example in areas with narrow roads or strict speed limits," the head of Berlin public transport operator BVG, Sigrid Nikutta, said, adding that bus drivers would still be needed as the driverless buses would not replace all traditionally operated vehicles anytime soon.

The vehicles will have a member of staff permanently on board, in case of difficulties, BVG added.

The buses will be able to travel at up to 15 kph (9 mph). They will initially only cover a 600-meter distance from the end of the U6 metro line to Lake Tegel.

They were developed by French firm EasyMile, which already supplies more than 100 cities with the autonomous vehicles.

The director of the Berlin Agency for Electromobility, Gernot Lobenberg, said it was an attempt to "bring new technology like highly automated vehicles into the real world." Berlin had previously tested autonomous buses away from public roads, on the premises of Berlin's Charite hospital, for example.

For years we have been talking about autonomous, self-driving vehicles. Yet we don't see them on the streets. But be patient, even if you can't see them, something is happening. (17.07.2019)