The Federal Statistical Office released the sobering news ahead of German Beer Day on April 23. But the price hikes don't seem to have dampened the nation's thirst entirely. 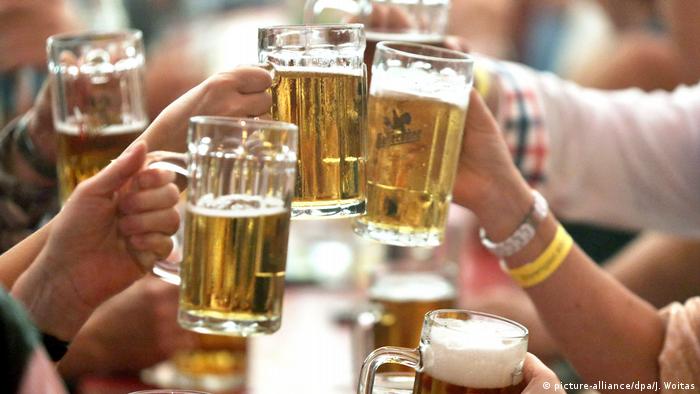 The prices of beer and drinks containing beer rose by 3.5 percent across the board in 2018, well above the official consumer inflation rate. That's according to data released by the Federal Statistical Office on Thursday.

Pilsners, lagers and dark beers were hit the hardest, with a price increase of 3.8 percent.

Read more: Beyond the Purity Law: Explore the diversity of German beer

Meanwhile, beer-based mixed drinks, like shandies with added lemonade or cola, saw a price increase of 3.6 percent, while the cost of alcohol-free beers rose 2.7 percent, reflecting their growing popularity. The price of wheat beer and Altbier rose by only 1.8 percent over the same period.

Germany came in 15th in UK-based Travelex's 2017 index which ranked countries according to their beer prices, with Bulgaria in first place, trailed by the Czech Republic, Hungary and Mexico.

Read more: Alcohol: Life gets better without it

Nevertheless, German breweries showed no sign of slowing down production. Across the country, 8.7 billion liters of beer were brewed last year, with up 2.2 percent — or 184 million liters — from 2017. According to beer statisticians, the increase in production has a lot to do with the long, warm summer and the month-long, beer-friendly FIFA World Cup.

Most beer brewed in Germany is sold within the country's borders, with beer exports rising only 0.1 percent over 2017. Italy was the largest market for German beer in 2018, followed by China and the Netherlands.

Carnival is over. The next Oktoberfest is far away. You might think these are hard times. Not in Bavaria: The strong beer season has begun. DW reporter Tankred Gugisch went on a tasty mission. (14.03.2019)

Oktoberfest in Munich is the world's largest folk festival. The song-filled beer celebration is a bucket list item for many. DW's Hallie Rawlinson filled us in on her first time attending. (01.10.2018)