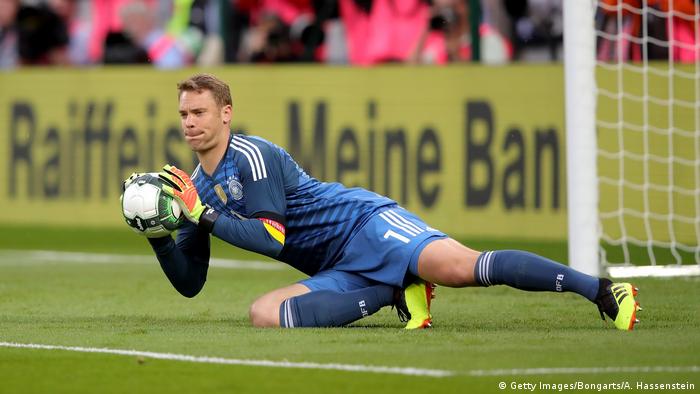 After months of speculation, Bayern Munich's Manuel Neuer will travel to Russia as Germany's number one goalkeeper despite having only come back from an eight-month injury lay-off in Saturday's friendly defeat to Austria.

Manchester City winger Leroy Sané was a surprise omission after enjoying an impressive season with the English Premier League champions with Löw opting instead for Bayer Leverkusen's Julian Brandt.

However, Brandt's club teammates Bernd Leno and Jonathan Tah, along with Freiburg striker Nils Petersen, will not travel to Russia.

Petersen was a surprise inclusion in Löw's provisional squad after an impressive season for his club, but the head coach has opted for RB Leipzig's Timo Werner and Stuttgart's Mario Gomez up front.

"There are certainly easier days in the life of a national team head coach than the day where I have to send four players home, four players who had merited their place in the provisional squad through their performances," said Löw at a press conference in Eppan, South Tyrol, where the team has been training.

"I spoke to the four players and the disappointment was huge, as you would expect. It's as if you are stood at the check in desk for your flight to Moscow, but are then prevented from boarding." 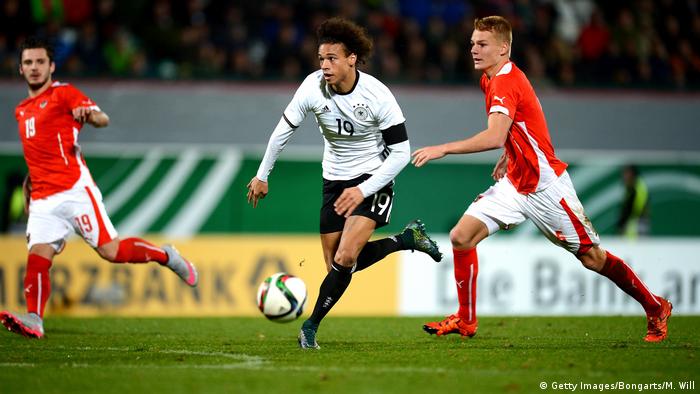 Boarding denied: Manchester City's Leroy Sané will not be on the plane to Moscow

Löw's final squad includes 13 World Cup debutants, including Borussia Dortmund's Marco Reus, who was ruled out of the 2014 World Cup and the 2016 European Championships by injury.

In contrast, only nine players have previous prior World Cup experience. Neuer, Mats Hummels, Jerome Boateng, Sami Khedira, Toni Kroos, Thomas Müller and Mesut Özil all have winners' medals from 2014, as does Julian Draxler, although the former Schalke star only played 15 minutes in Brazil.

Mario Gomez was part of the 2010 team in South Africa which was knocked out by Spain in the semifinals.

Hertha Berlin's Marvin Plattenhardt is the least experienced player to be nominated, having only made six previous appearances for the national team. The 26-year-old will act as back-up for left-back Jonas Hector, the only representative from Germany's second division after his club Cologne was relegated. 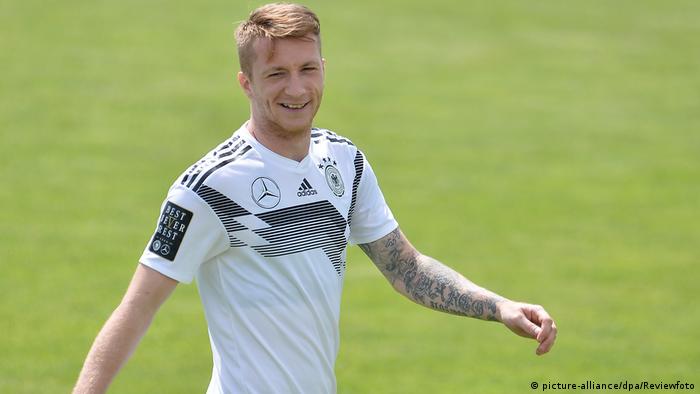 All smiles: Borussia Dortmund's Marco Reus is going to his first World Cup

Joachim Löw still has the chance to make one change up to 24 hours ahead of Germany's opener against Mexico in Moscow on June 17 – should a player get injured.

Until then, the squad will remain at their training camp in Eppan, South Tyrol, before a final friendly against Saudi Arabia in Leverkusen on June 8.

Germany travel to their World Cup base in Vatutinki, near Moscow, four days later.