Germans Disappointed in Obama′s Stance on Death Penalty | Germany| News and in-depth reporting from Berlin and beyond | DW | 28.06.2008

German politicians across the political spectrum have responded with surprise and harsh criticism to comments by US presidential candidate Barack Obama calling for the death penalty for child rapists. 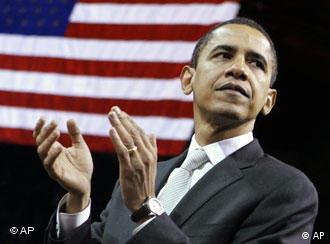 Is Barack Obama the next president of the United States?

Despite their immense adoration and support for the Democratic presidential candidate, German politicians and the media were quick to attack Obama for his comments in favor of extending the death penalty for child rapists.

"The death penalty is the ultimate violation of human rights and the right to life," Green party leader Claudia Roth told the Bild newspaper. Obama should be working for abolishing the death penalty in the United States, not for expanding it, she added. 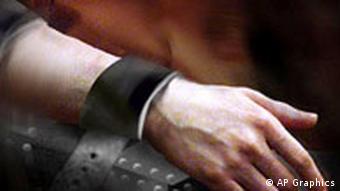 Only five US states allow the death penalty for child rapists.

Earlier in the week Obama criticized a US Supreme Court decision declaring the execution of child rapists unconstitutional. Speaking out against the ruling, which struck down a Louisiana law allowing capital punishment for people convicted of raping children under 12, Obama argued that states should have the right to consider the death penalty for such a heinous crime.

The death penalty "should be applied in very narrow circumstances for the most egregious of crimes," he said.

The court had ruled 5 to 4 that applying the death penalty in such cases violated the US Constitutional ban on cruel and unusual punishment. Since 1964, the death penalty has only been applied to those convicted of murder.

Obama's comments, which observers say were designed to counter any perception that the Democratic candidate is soft on crime and bring him more in line with the views of the American middle, were harshly rejected across the political spectrum in Germany, where the candidate enjoys more popularity than anywhere else in Europe.

The head of the conservative, Bavaria-based Christian Social Union, Erwin Huber, said that although "child rape is one of the most heinous crimes, the ban on the death penalty must be absolute." 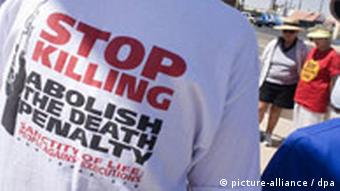 The death penalty is banned in all European Union member states.

Former Justice Minister Sabine Leutheusser-Schnarrenberger of the Free Democrats echoed that position, arguing that the death penalty should be abolished world-wide.

"The death penalty is just as inhuman as the crime of child rape," she told the Bild newspaper.

The foreign policy spokesperson for the Union bloc of conservatives in the German parliament, Eckart von Klaeden, cautioned against upholding a false Obama image in Europe. "With all the Obamania in Europe, many make the mistake of believing they can measure Obama on European standards," he said.

Obama falls out of favor in Europe

German media took Obama to task in several editorials over the weekend, but some also urged their readers to see Obama for what he is, "a short-lived darling of the European political salon," as the Düsseldorf Rheinische Post described the candidate's fall from favor.

The Berlin-based newspaper Tagesspiegel appealed to Germans and Europeans in general to wake up from their Obamania trance and recognize the truth behind the democratic candidate's comments. 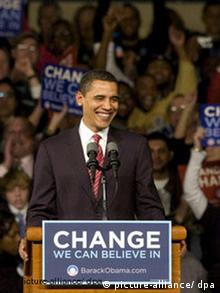 Obama campaigned on the slogan "Change we can believe in"

"So often Europeans told themselves: we are not against America only against George W. Bush. Now that the left-leaning Obama has removed his mask to become a president-in-waiting, many in Europe are beginning to realize that the negative aspects they eagerly attributed to Bush are in fact deeply embedded in the land itself: the death penalty, gun ownership, moral conservatism and a dogmatic belief in its own righteousness."

The Saarbrücker Zeitung questioned how much still unites Europe with America. "Among the western democracies, the US is the only country that still applies the death penalty and allows for widespread ownership of guns. This is the America Europeans always regarded as the America of George Bush. Now we know that this America will hardly change under a President Barack Obama."

As George W. Bush makes his farewell tour to Europe, former German foreign minister Hans-Dietrich Genscher said the US has suffered a "large loss of influence and respect" under Bush's presidency. (15.06.2008)

Senator Barack Obama has clinched the Democratic nomination. DW-WORLD.DE spoke to former US Ambassador to Germany John Kornblum about the prospect of an Obama presidency. (04.06.2008)

Voters in five major European countries showed a strong preference for Barack Obama as their favourite candidate to win the United States presidential elections, according to a poll published on Friday. (30.05.2008)

A German-American blog on the US election